Bonds have just been through one of the worst four-month periods ever, down around 10%. In our income and accumulation portfolios we held a “market-weight” position throughout, which has been a big drag on performance. Clearly, we should have been underweight.

That said, markets move in cycles. While it is possible that returns from bonds will continue to be poor, in our view the opposite is now likely – the market has moved too far. Current market prices imply that the central bank will raise yields to 2.8% by Christmas, and 3.5% by mid-2023. Taking mortgage rates to around 7%.

In my view that is crazy. Moving to 7% mortgage rate will crash the Australian housing market, plunge the economy into recession and see the central bank rapidly back-pedalling.

The speed of adjustment has been key

The major factor in bond portfolio losses has been the speed of the change.

A bond ladder is a typical exposure for investors. An example bond ladder might have one bond expiring every year for the next 15 years. Each year, your bonds move one year closer to maturing. Each year you take the money from the bond that matures and buy another 15-year bond.

If bond yields had moved evenly from January levels to current levels over 5 years, then bond investors would have finished about even. Not a great result admittedly – but a long way away from a 10% loss from the sudden movement.

Traders who buy and sell rapidly, use leverage, or take long/short positions have reasons to worry about significant losses on bonds.

Typical investors, though, buy bonds because of the certainty they provide.

When you buy a current Australian 10-year bond, you know exactly the return you will get if you hold it to maturity. You will pay $82 today for the bond, you will get $0.62 every six months, and in May 2032 you will get back $100. You have locked this return in.

The price of your bond will vary. But this only matters if you’re going to sell the bond before maturity. If you hold it to maturity, the variations in price and value are only paper losses along the way. The returns will not change if you hold the bond until maturity.

Focus on the future

If recent losses make you feel like bailing out on bonds, reconsider why you own them. Bonds aren’t meant to be a source of super-charged wealth creation. Bonds are there to give you the certainty of income, while providing a hedge against sudden recessions.

Given the speed of the interest rate rises, a hedge against a sudden recession is looking more attractive by the minute.

The response from central banks to recent inflation has been to signal that they are going to slam on the brakes. Central banks are going to beat demand down to the level of supply. The Australian central bank, in particular, promised to be “data-driven”, stop relying on wage growth forecasts (which had proven hopelessly optimistic) and wait for actual wage growth. They promised no rate rises until 2024. Both promises have been thrown out the window.

At the same time, governments have hauled on the park-brake. We have a record amount of government stimulus being withdrawn from the market.

This all may be the right policy for constraining inflation. Maybe world demand needs to be beaten down to much lower levels. But, it is not a good recipe for investment in stocks. Or property. If we are right that the bond market has over-reacted, then it is a good environment for bonds.

The Ukraine invasion early in 2022 has changed the timing, but not the endpoint. It has made the inflation situation worse in the short term, but it also makes the demand equation worse as higher energy prices weigh on consumers.

Our initial assessment was that the Ukraine invasion would mean that central banks would be less likely to raise interest rates as much. However, this does not appear to be the case, rather central bank guidance is that they will be moving interest rates more. In my view this makes a bond investment more attractive, as it appears:

Which means an increased likelihood of a recession.

Australian bond yields are at the top of the developed world

The real benefit of bonds is that you know already how much money you are going to lose over ten years if you hold to maturity. The answer is zero. If you buy a ten-year bond at 3.5% and hold it to maturity, you will get 3.5%.

That is the point. Bonds give you certainty of return. What they also give you is the option to sell the bond part of the way through to take advantage if yields continue to fall.

At the moment, Australian bonds are among the highest in the developed world where credit risks are low: 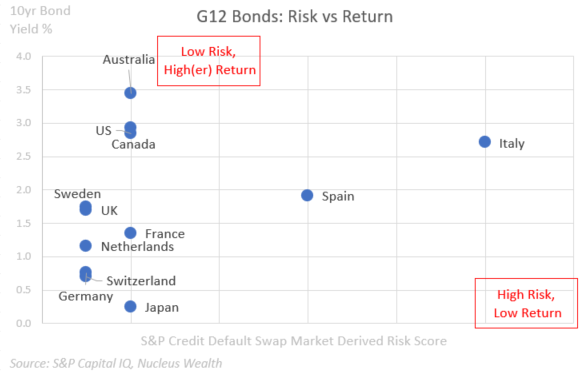 If central banks are successful in bringing commodity prices to heel, then Australian bond yields will revert closer to world averages. In that scenario, the value of a typical bond ladder will increase by around 5%.

If the rapid rise in interest rates brings about a recession, there is another 5-10% of return available for a typical bond ladder.

As I’ve noted above, that only matters if you sell the bonds though. At current yields, we are not looking to sell them. If we see equities crash and yields fall, then we will switch.

Going forward, the risk-return equation for bonds is broadly: