For years, the RBA has argued that an economic recovery is “just around the corner” with wages and inflation about to increase.  So far the RBA has been wrong – their preferred trimmed mean inflation has been below target for 3 years and counting. The issue is the penalty for being wrong during a housing boom was that the boom wasn’t as big as expected – but the penalty for being wrong during a housing market correction is that the correction turns into a crash that drags the rest of the economy down with it.

Most Australians are kidding themselves when they think they have a diversified portfolio that will protect them from an Australian housing downturn. 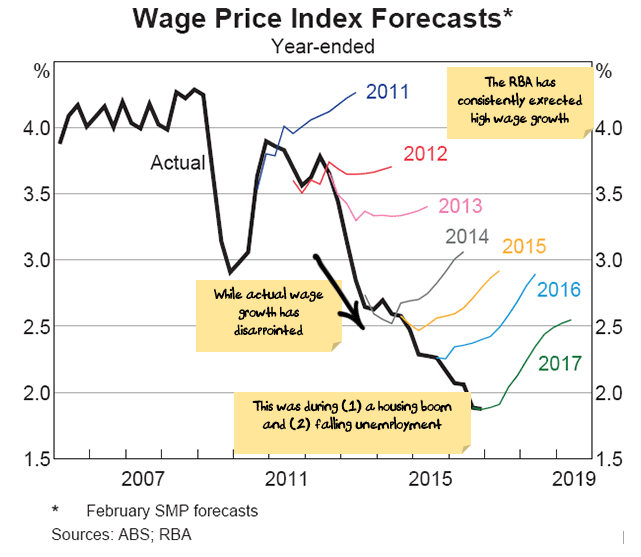 The Australian economy is at a crossroads, either (1) RBA is right, something will show up and everything will be fine (2) RBA will continue to be wrong, or there is an international economic shock, and the housing correction will turn into a housing crash.

Forget for a moment the arguments for and against the two paths. Let us assume that both are credible outcomes with a non-zero probability of occurring.

My issue is the upside and downside risks are not equal.

Very few Australian have any diversification against the second option. If you are not diversified, and I mean properly diversified, (not just that you own both bank shares and bank hybrids) then you could be facing dire financial circumstances.

If the RBA is right and you have any of the following characteristics then you will benefit:

However, if these are the only assets you have then you have basically shifted all your chips into the middle of the table betting on a recovery in the housing market. You may be right, but if you are not then you will be in trouble – and if you have a loan against property or shares, or if you are employed in a sector related to the housing market, then your risks are exponentially higher.

Keep in mind also that a likely outcome of a housing crash is a much lower Australian dollar. If you expect to buy imported goods in the future, they will cost more. And with the new structure of the Australian economy, we all buy imported goods – cars, phones, TVs, computers, none of it is made in Australia. Australian’s have even turned electricity into an import – the marginal price of electricity is set by gas, and Australians now pay some of the highest prices in the world for gas as we are now tied to the Asian gas price through exports. So, the Australian dollar falls and your electricity and gas price will also likely rise.

So, even if you don’t think option 2 is a likely outcome, you should be doing something to hedge against it.

In both the investment and superannuation funds that I run, I prefer lower risk hedges: Australian government bonds, cash (both domestical and foreign currency denominated) and international shares, but there are a lot of other ways you can protect yourself from the downside. This most recent stock market bounce has given you one more opportunity to position your portfolio – and I’m not that confident you will get another one.