We have long been of the view that the Reserve Bank is misdiagnosing the economic environment and interest rates are not going up any time soon. Over the past few months, interest rate markets have joined our pessimism and bond yields have fallen – netting a tidy profit on longer-dated bond holdings. After today’s RBA meeting the question is whether the fall bond yields is over or whether there is more to come?

The short answer is no, I don’t think we are there yet – the broad sweep of our strategic holdings over the next few years is to continue to expect central banks to struggle to create inflation. Further, most of the weakness has stemmed from global bond yields falling, we believe there is a further leg down as the Australian economy weakens.

Having said that, the risk/reward trade-off has obviously changed. The decision to buy 10y government bonds at an almost 3% yield is different from the decision to keep holding at a 1.7% yield.

Looked at over a longer term horizon, it is important to remember that government bonds cashflows are very, very predictable. Even more predictable than cash:

Take the April 2029 treasury bond. You could buy it Tuesday for around $115, it will pay you $3.25 per year in interest payments and in April 2029 you will receive $100 back. Which means if you hold this bond to maturity, you know today you will get a 1.7% per annum return.

Which is a bit sad to be frank.  The RBA is targetting inflation between 2 and 3% and so the ten-year bond is giving you a chance to lock in a negative real yield.

But you don’t have to hold to maturity. From an asset allocation perspective, a government bond is a kind of option. You have locked in a 1.7% yield as your hold to maturity return and if you want to sell in the interim there are two possibilities:

Over the longer term Australian bonds have traded in lockstep with bonds from similar (developed market) commodity exporters like Canada or Norway: 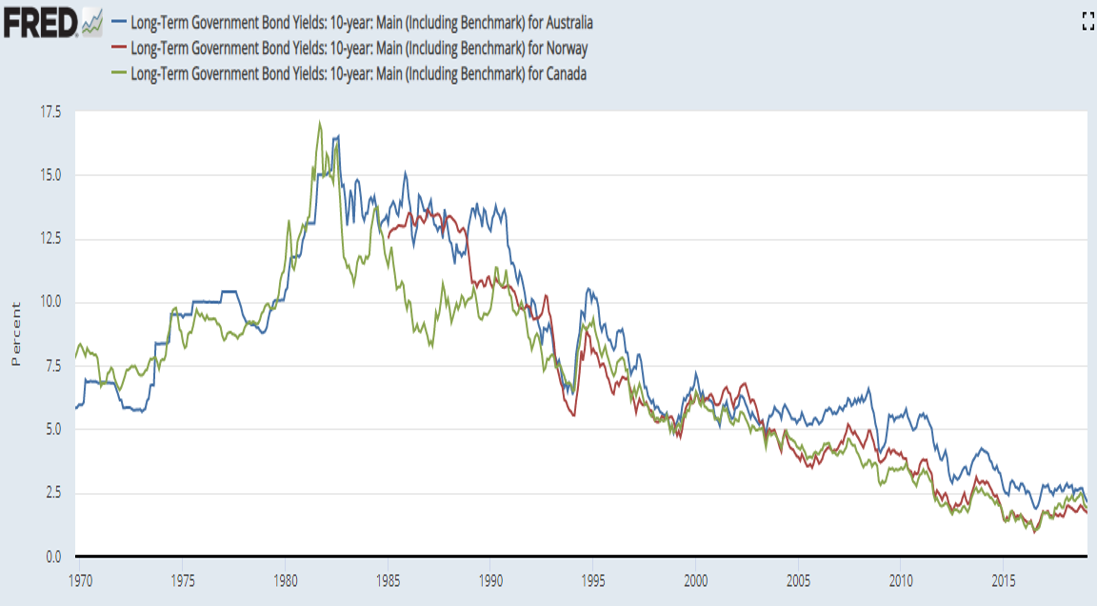 Over the last 5-10 years Australian bonds have has been trading on a premium to international bonds, in our view mainly due to elevated iron ore and coal prices juiced by Chinese demand.  Going forward we are expecting this to revert.

Globally central banks have struggled to create inflation – we believe that a mix of demographics, inequality and job automation have combined to keep demand and wages growth low. We do not think that Australia is a special case and Australia has merely been a fortunate trade partner for China which has been fighting weak demand by dramatically increasing its debt burden.

It is important to note also that there are a number of countries with zero per cent ten-year bond yields – Japan and Germany the most high profile: 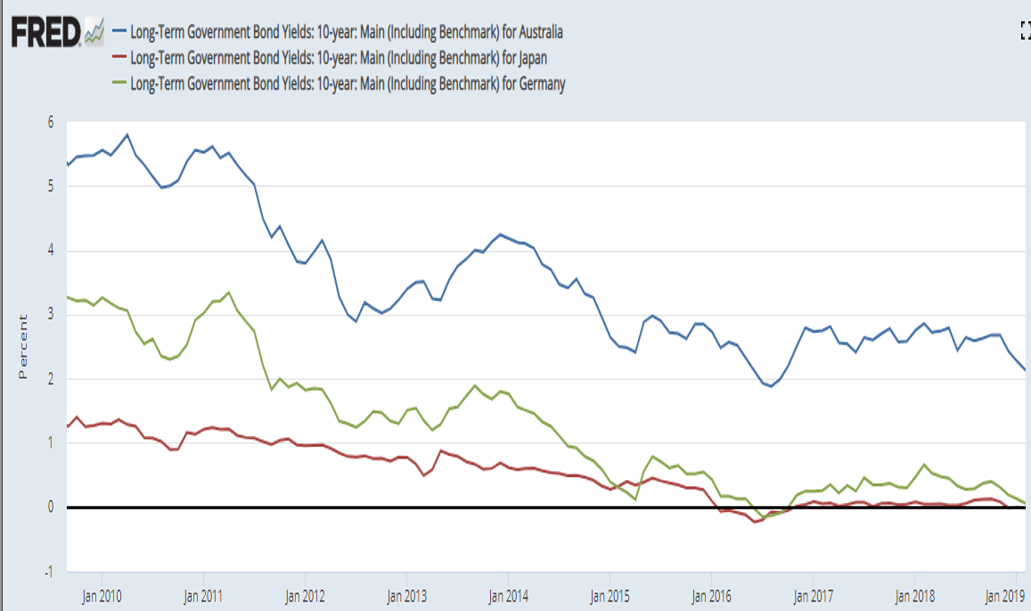 Relative to these countries, Australian bonds look good value. While we are not of the view that Australian ten-year bonds are going to zero percent, it remains to see how aggressive the Reserve Bank will be – to date they have been conventional in response to conditions. Most “conventional” central banks have interest rates close to zero.

To arrest the decline in bond yields something needs to change – Japan has had 20 years and Europe has had 10 years to show that monetary policy can resolve the issues. It is clear to a growing number of economists that continuing the same policies that created the problem won’t work and structural change is needed.

The RBA has a wide band compared to most central banks, despite this Australia is now partly through the third straight year where inflation has been below the RBA’s band.

The bond market is telling the RBA what we have been saying for years – given where we are in the longer term cycle, central bank’s only real lever to create inflation is to blow a debt bubble. In Australia, the RBA (aided and abetted by lax lending standards) has already played that card for consumers. The royal commission into banking is now reversing much of the lax lending standards.

The RBA should have learnt some valuable lessons from other countries that have been through the same process of dealing with weak demand, but to date, the RBA has been very conventional.

The question is whether the RBA has scope to blow another debt bubble? Our expectation is that the RBA doesn’t have the scope to do much on housing (consumer debt already extremely high, house prices now falling), it is possible that a government debt bubble could be created but that is not being contemplated at the moment. Corporate debt is already relatively elevated (globally), and there is relatively limited scope to expand it much further.

What to watch for

WIth this in mind there are a number of things that we are looking for as a sign that government bonds are close to their low point. There are a lot of moving parts and it is unlikely to be just one of the following factors, more likely to be a mix with some factors positively affecting some negatively affecting.

Other things to watch for:

We are looking to trim some positions but we are keeping an overweight bond exposure.