Last week we got an update from the US EIA on the growing differential between electricity prices throughout the day – the spread is now out to $45/mWh between prices at 1pm and prices at 8pm: 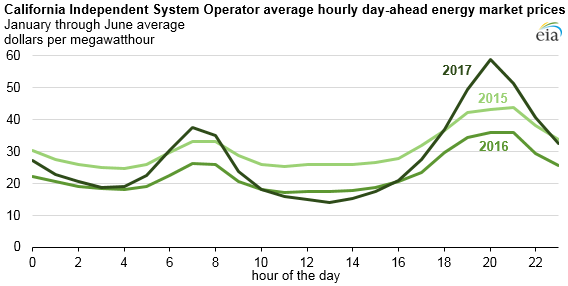 Given this, it is worth a quick update of where prices stand in our journey to energy parity, particularly for batteries.

Keep in mind that the above chart is the “day-ahead” price. The actual energy price

Earlier this year we had a detailed look at the big picture numbers behind electricity prices and batteries in particular, concluding that (utility scale) batteries to shift the usage from 1pm to 8pm would be around $US220/mWh but that costs were falling at 20% per annum.

Tesla’s recent South Australian battery costs seem to be in that ballpark (I haven’t seen an official figure, maybe readers can point one out?), reports seem to suggest $US200-250.

Since then, Bloomberg has updated its battery numbers for 2016, showing that batteries continue to fall at 20% per annum:

At around $200-250/mWh batteries are a good alternative to peaking plants but they are a long way off influencing the $45/mWh typical spread between electricity prices throughout the day and prices at night.

Updating our investment summary from earlier in the year:

At the moment, it looks like 7-10 years until we hit “energy parity” (see report from earlier this year for details) between solar+batteries and fossil fuels if current cost reductions are maintained. And don’t sleep on rooftop solar + batteries – they are a lot more expensive than coal, but retail power prices are a lot more expensive than wholesale. There is a decent chance that rooftop solar + battery users going off-grid start a “death spiral” for electricity transmission.

Battery costs are the major determinant at this point – if the rate of improvement slows then it may take 15-20 years. The base case is that battery improvement will be sustained, but it’s far from a given – this is the assumption to watch.

Power prices during the day are going to continue to fall over the next few years as we end up with a surplus of power from renewables. This will actually drive the pick up in batteries – the bigger the difference between the day price and the evening price the bigger the incentive for batteries.

So, how does this affect investments: