Both Wood Mackenzie and S&P have released separate reports claiming a massive copper shortage. After Wood Mackenzie’s report last week, headlines like this appeared: “Almost unattainable” gap between green energy copper demand and mining supply. The last time I wrote about my copper scepticism, copper was the wonder metal, trading at over US$10,000 per ton. Copper investment was “the only thing” that would protect you from inflation and headed for the moon. I copped a number of “how dare you question the bullish narrative” tweets, comments and phone calls. Now copper has fallen 30%. I’m hoping it is safer to comment :).

At copper prices of $7-8,000 per ton, I’m largely ambivalent about copper as an investment in the long term. Broadly speaking, over the long term, buy at $5,000 per ton, sell at $10,000 per ton seems about right based on the cost of production. 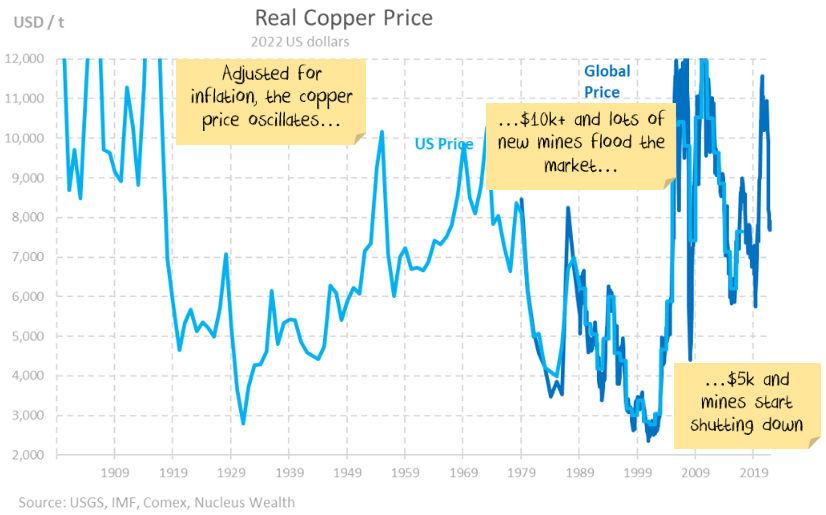 However, mines take a long time to come onstream, so there can still be opportunities to invest in the mid-term. Right now, from a macro perspective, I’m bearish. I think central banks will break something, and there will be more copper supply coming on in the next year or so.

First, start with the problem. Wood Mackenzie thinks the world is missing 9.7Mt of copper, forecasting the following:

Something looks off with these numbers. I reached out to Wood Mackenzie to get them onto a podcast, but unfortunately, they don’t want to talk about the detail. So I can only interpret what I see.

There are only three big numbers that matter here: Organic demand growth, Electric Vehicles and Grid-related all of which we question.

This stat gets used all over the internet. It may not be from an impartial source. I’m going to focus on the word “can”. It is true that electric vehicles “can” use 3-4x more copper. It is unlikely that they will.

Cars with internal combustion engines use about 22kg of copper. It looks like Wood Mackenzie is using around 65kg per electric vehicle extra to get to their forecasts. That looks high.

Then you get to the battery. Battery chemistry varies quite significantly; indicatively a typical battery with a 500km range contains around 35-40kg of copper. But there is a range of battery technologies being developed, many with less copper. “Nickel, manganese, cobalt” and “nickel, manganese, aluminium” batteries use about 40% less copper. Solid-state batteries appear to be the next evolution in battery technology. They use half as much copper.

I think the IEA numbers look about right:

I won’t get into the driverless car debate. Except to note that if driverless cars do take off in the next 20 years, then the cost of a taxi/uber could fall to the level of public transport prices. If that happens, there might be a lot of people not needing a car at all. Or even just not needing the 2nd/3rd car. Car production could be smashed.

Since 2014 copper usage per person has flatlined. 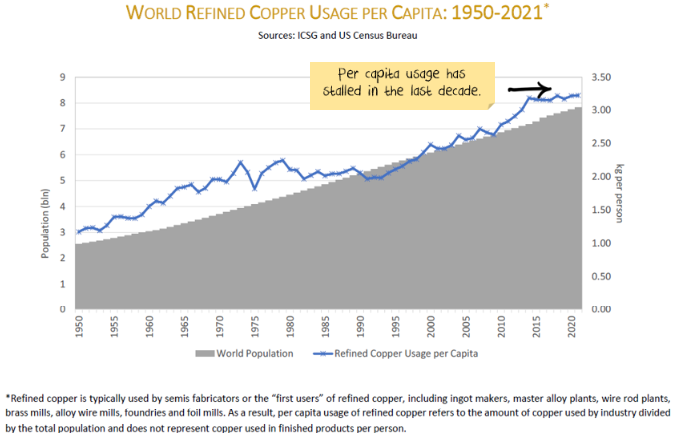 Which I suspect is a mix of less copper in developed countries offsetting more in emerging countries. Keeping in mind that this includes all of the growth in renewables and EVs in recent years. For example, globally,  over 40% of new 2 and 3-wheelers and buses are already electric.

I’m not sure how Wood Mackenzie came to the organic growth forecast.

But if I use the UN population projection and assume copper usage per person doesn’t change then you can almost halve their forecast. From 8.9Mt to 4.8Mt. 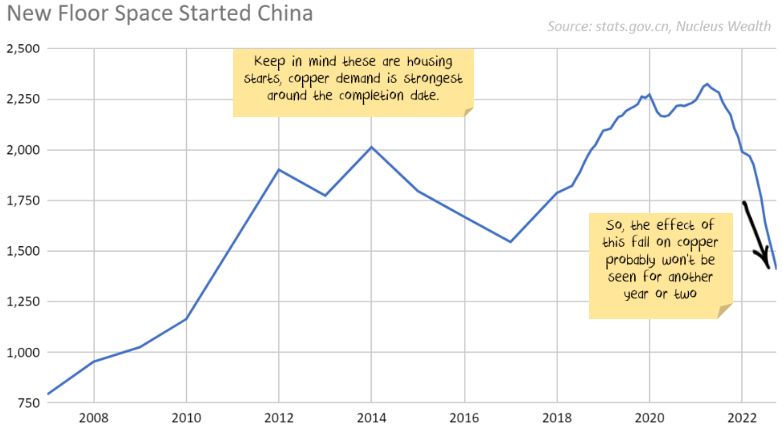 My rough estimate is that if Chinese housing starts fell another 30% then they would be at levels typical to other countries. The effect of the above has not been factored into the copper market.

So say you were a copper bear and assumed:

Then, you could come up with credible scenarios where Chinese copper consumption subtracts another few million tonnes.

First, the Wood Mackenzie numbers again look high. 6.7Mt is almost 40% more than the IEA forecast for the same outcome.

Second, more aluminium may get used than copper, particularly for overhead lines. Aluminium is much cheaper and lighter but a worse conductor. The IEA looks at scenarios where copper usage barely changes because of switching from copper to aluminium. Not a base case, but a risk case.

Finally, grid-related forecasts assume a bigger grid with more connections. If the grid devolves to more local energy storage and local generation, it is possible that this category could consume less copper. A good analogy is the telephone. Developed countries set up copper-based phone networks, but many emerging markets skipped straight to mobile networks. Could some markets do the same with energy? Not sure if it is a base case, but I certainly wouldn’t rule it out.

Are we running out of copper?

But that didn’t stop real prices from falling for most of the same time frame. 100 years ago grades were 4% vs 0.4% now. But 100 years ago people were using picks and shovels. Now mines are increasingly automated. The cost of mining keeps falling.

And even as the amount mined per annum increased exponentially, the years of future production has remained around 40 years due to new discoveries and more efficient mining: 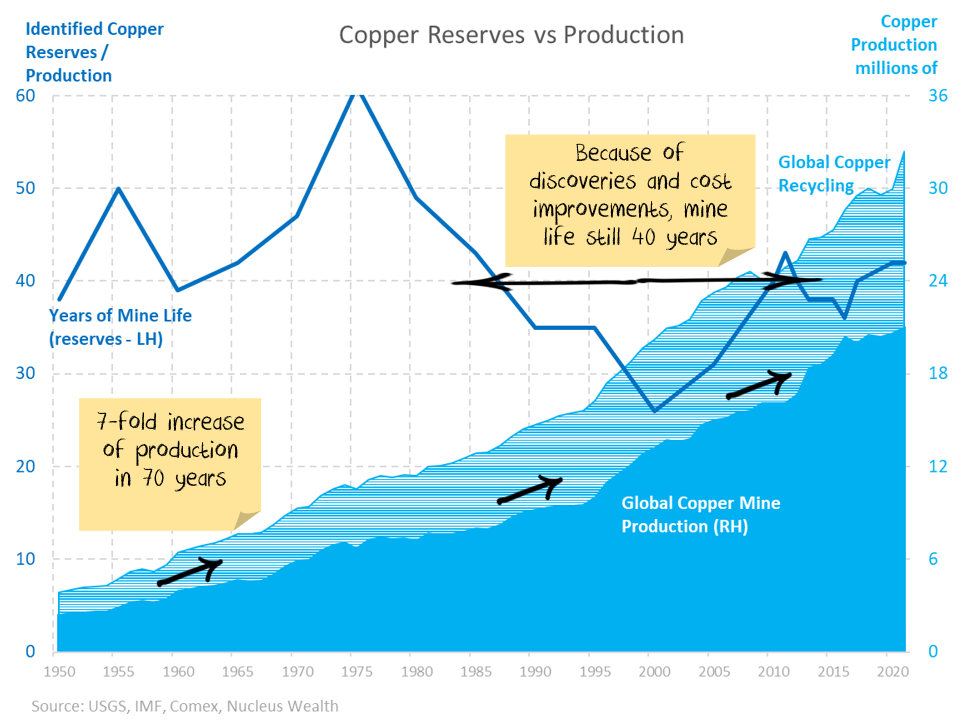 My narrative is that commodity prices fell for 100 years in real terms up until the turn of the century as technological cost improvements trumped falling grades. 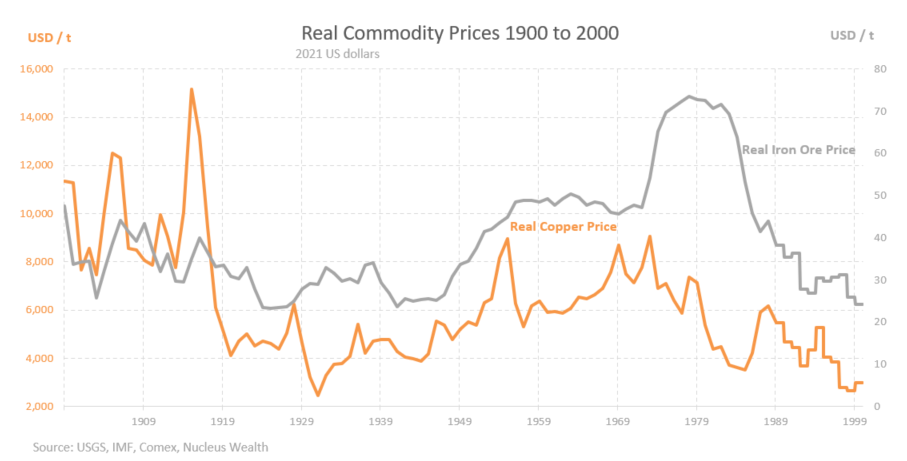 Then the rise of Chinese demand (in particular construction) saw prices spike to record levels on the back of a doubling and tripling of demand over a single decade.

But the market worked! The growth in volumes merely paused in 2015, and prices tumbled back to long-term averages or below. The latest spike in prices was not caused by a significant increase in demand. It has been about a mild demand increase running into supply problems. And now copper looks to be running into both weaker demand and increased supply.

The upshot of all of this is that if you are sure that:

then copper is probably the right commodity for you.

If you have doubts over any or all of these, you might not want to go all-in on copper investments.