A frequent focus point for the media is whether a company “beat” its earnings forecasts or not. But the definition of a beat or miss is poorly constructed, and often misleading. For me, changes in forward estimates are a more reliable indicator of whether a reporting season is progressing well or not. On that basis, despite a few individual mishaps, the US market is still the belle of the ball.

Beats or misses can be misleading

Because Nufarm hasn’t reported yet, this is neither a beat or a miss. However, say Nufarm reports 31c in six week’s time, then that will be recorded as a beat – as it is higher than the 30c currently forecast. i.e. a company that recorded a massive downgrade in earnings just prior to the end of it’s financial year will be treated as a winner in the earnings beat analyst forecasts from the day before the result.

Just as big of an issue is normalised earnings. Analysts interpret the profit and exclude certain items from the analysis – but these vary analyst by analyst. So, one analyst can think the company beat consensus and another look at the same numbers and think the company missed due to different definitions.

So what should you look at? If you don’t have time to do the full analysis, the better place to look is usually forward earnings – although keep in mind that forward earnings will take a number of days to “catch up” to announcements.

On a forward basis, so far the trends we are seeing in this earning season largely match our expectations.

US earnings still being revised upwards:

Eurozone earnings trying to hold on:

Japanese earnings coming off their peak: 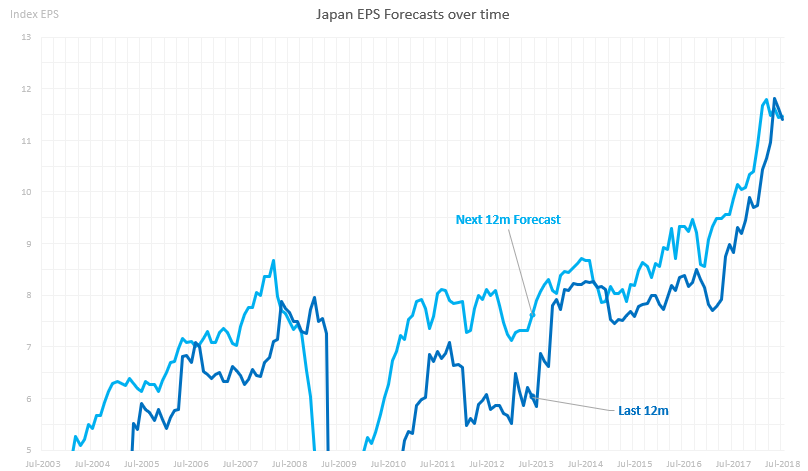 Sector changes over the last month: