Yesterday we had a long look at solar and battery power and how they affect the electricity sector. Today we extend the battery analysis to the oil sector and look at electric cars.

“It ain’t what you don’t know that gets you into trouble. It’s what you know for sure that just ain’t so.” Mark Twain

It seems that everyone in the oil industry “knows” that oil prices are going back to $75+ and that is what is priced into stocks – a 50%+ increase in the oil price. If that fails to come through, and excluding short-term price spikes I think it will, then look out below.

Oil is just another energy source, but it has a “portability premium” baked into it – it’s a lot more convenient to fill a car with oil than it is to fill it with coal. Also, batteries are too heavy for planes, small/backup generators that run on oil are way more convenient than small coal-fired power plants. This portability premium is currently about $35 per barrel.

But batteries change the equation. It means that oil fits onto the “energy parity” curve as well – and it will lose its portability premium. 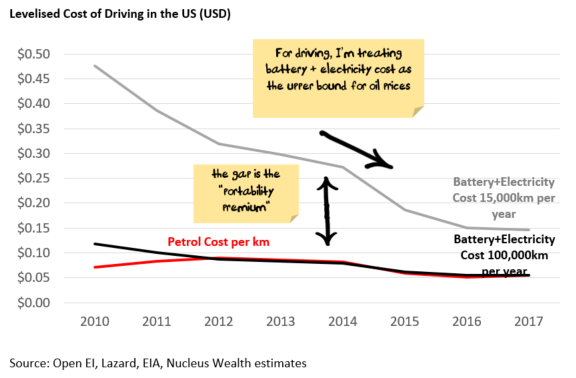 Yesterday  I discussed the notion that backup generators are already at the point where they have lost the portability premium – wind or solar + battery now beats a diesel generator for cost. But these are only a small part of oil demand.  And planes are nowhere near ready for batteries – the power to weight ratio doesn’t make sense.

So it is down to transport – which is the main area of demand for oil.

The good news for oil aficionados is that private cars have another 10-15 years or so before battery economics start to hurt demand.

The bad news? If pump prices were 50% higher than current levels, then you only have 5 years. For a taxi, it is worth switching to electric about now. In 10-15 years time, a number of regions (California, Germany, China, Netherlands, Norway) are likely to have partial or even full electric vehicle mandates on new cars.

Either way, oil demand is probably not dropping significantly in the near future based on electric car take-up unless we see:

This isn’t a bull case for oil prices:

However, I need to acknowledge that I went looking for a 3-5 year bear case for oil based on lower battery costs, but struggled to find one. 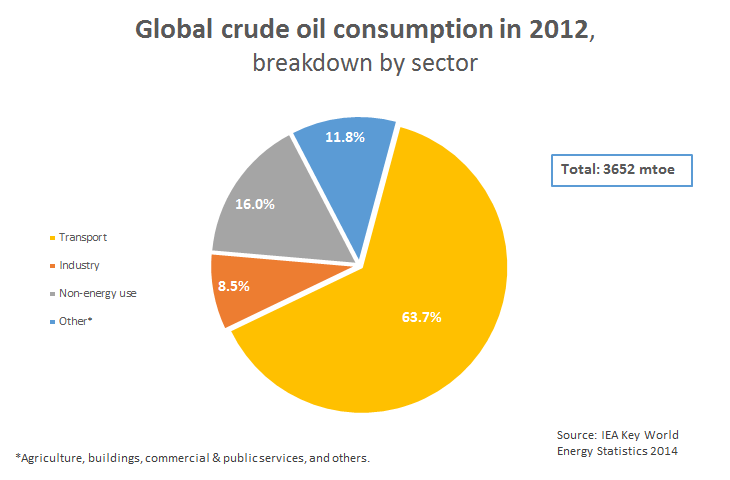 Electric cars have a number of other benefits, the main economic one being lower servicing costs as there are far fewer moving parts.

On an energy content basis, oil trades at a considerable premium to other energy sources:

So, “energy parity” comes down to economics once again. If the cost of a battery per kilometre is less than the cost saving then people switch en masse. If not then they don’t. But there are more complicating factors for driving, the key ones being range anxiety and how far you travel.

If you need to buy a 100kW battery to assuage your range anxiety then the upfront cost is a lot larger than if you are happy with a 60kW battery.

How far you travel is even more important. Someone driving 10,000km per year is amortising the battery cost over a lot fewer kilometres than a driver doing 100,000km per year.

In the table below I have shown the approximate costs for a taxi doing 100,000km per year with a 300km range battery (recharging about once a day), vs a passenger car travelling 15,000km per year.

But for taxis, the point is around about now – a taxi amortises the cost of a battery over a lot more kilometres.

A key question is this. If: (1) driverless taxis are cheap and (2) battery power makes sense for taxis, could we see a major shift to driverless electric taxis have a big impact on oil demand?

Yes. Yes we could. And probably will eventually. It is just that even the techno-optimist in me has trouble coming up with a scenario where that happens in the next 5 years.

I have cut this a number of different ways, but the simplest way is to look at car hire companies:

It is pretty compelling. Basically, a driverless taxi would be cost competitive with public transport.

Having said that, a driverless bus could mean that public transport also gets much cheaper. And driverless buses will be much easier to program – set path, usually in a city that can be easily mapped.

For many people those economics will work out to be better than owning a car.

As an aside, my expectation is that by the time the current light rail tearing up Sydney and causing traffic chaos is complete, driverless electric buses will be just about ready to go. With basically all the benefits of light rail. And they don’t need a track. And you can easily re-route them.

Yes, there are lots of problems. And legal/insurance issues.

At some stage though we will see a government somewhere decide that an aggregate saving of lives is more important. My bet is that it will be difficult for a traditional democracy to be the first. Singapore makes a lot of sense as the first: rich, educated, small area, already discourages people from owning cars.   China is another that could take the plunge – and at that point, I’d bet that America’s “competitive spirit” kicks in and results in driverless cars there as well.

After that, it will be a lot easier for other countries.

Who knows when this will occur. Trials are active in a range of markets. We are probably talking 3-5 years at least just to start.

Uber/Lyft combined took around five years from launch to now delivering the same number of trips as taxis in New York.

I suspect there is a similar fear/greed matrix:

Will it take longer? Who knows.

I’ll bet the first few driverless car deaths get a lot of headlines.

But I bet that a $5 ride rather than a $50 ride will also attract a lot of headlines.

Is the technology ready? It is close.

The final technology polishing may take a number of years, it may be ready in a few months – it is very hard to tell.

Summing it all up

Best case for driverless cars would be a limited release before 2020 in somewhere like Singapore. Taking into account rollout in other countries, acceptance, fleet build-up etc its probably not going be significant for world oil prices before 2025.

Worst case we are 50 years away.

Either way, oil demand is probably safe for the next 5 years.