April continued the March boom, with the US leading the way, buoyed by a swift vaccine roll-out and fiscal stimulus measures. Investor sentiment was supported by the combined economic and policy backdrops, but also a robust US earnings season.

Our asset allocation portfolios all posted positive returns for the month, and continue to deliver significantly lower volatility than the market.

More importantly, it was a reversal month. Value stocks performed strongly in March (and again so far in May) – and our portfolios are leveraged to that trade. The reversal in April meant that we did not rise as quickly as the market, but our underperformance has been erased so far in May as markets returned to the value trade. 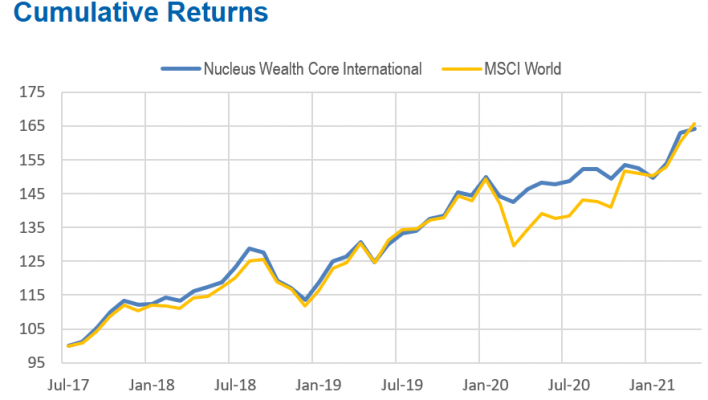 We have been warning for months that markets will get carried away with extrapolating short term inflation long into the future. This month we saw high inflation prints in the US and we expect inflation will stay high in the coming months. But most of the inflation is either in the supply chain or comes from low base effects, both of which will pass.

Inflation is not well understood.

Inflation is not well understood. Most central banks have been trying to create inflation for the last decade. And failing. The Bank of Japan? 30 years.

In 2010, many prominent economists were so sure hyperinflation was coming that they wrote an open warning to the then head of the US Federal Reserve. No inflation.

This isn’t to say we know nothing about inflation. But it does mean that we need to approach inflation forecasts with skepticism and keep an open mind on outcomes.

A brief history of inflation

Pre-1900, inflationary bouts were common. They tended to coincide with either population growth, famines, war or monetary debasement.

Today’s economies are different. The factors that cause inflation in agricultural societies are not the same as in a modern economy. 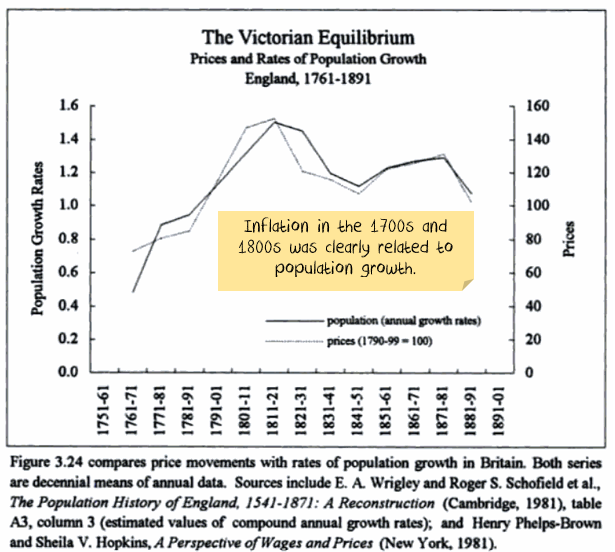 The world struggled with both high inflation and high unemployment for most of the 1970s and 1980s. This is the scenario that technocrats are looking to avoid.

It is worth noting three other important factors:

High inflation becomes the norm in the 1980s.

The pendulum swings to the other side

Stagflation was cured in the 1980s. The narrative is inflation was solved by the US central bank, which raised interest rates high enough to stamp inflation out. i.e. the central bank was prepared to cause a recession to “anchor” inflation expectations.

Arguably, the pendulum has swung too far. The steps taken to prevent inflation have entrenched disinflation. 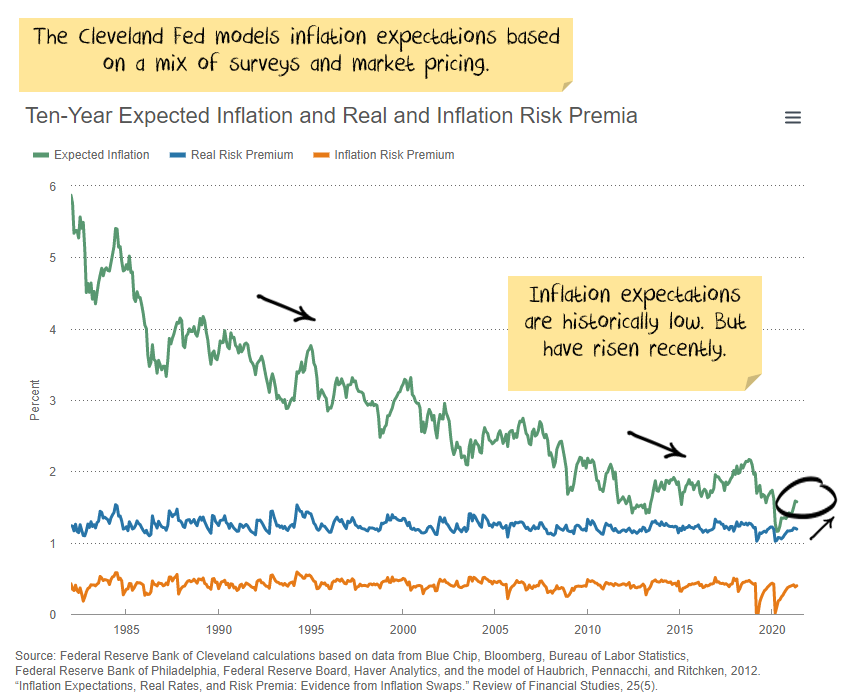 Debt is a two-edged sword when it comes to inflation. Increasing private debt levels can drive inflation higher while the debt is accumulating.

i.e. if the debt is created for productive assets like buying new businesses or infrastructure, it can quickly pay for itself.

Suppose the debt has been accumulated in non-productive assets like bidding house prices higher. In that case, there is more likelihood that it will slow inflation. 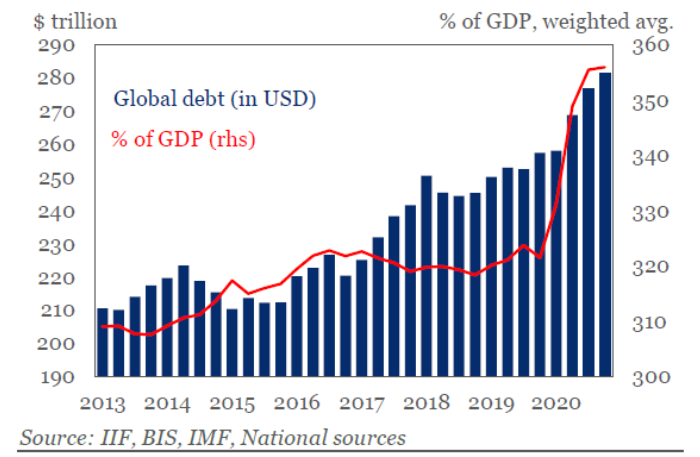 In the next few decades, power grids will either evolve or collapse. The age of centralised energy is all but over. Ahead lies a radical evolution to the decentralised and local. Moreover, as it is completed, energy costs will continue to decline every year, sourced from sun and wind every day and stored in little boxes of chemicals. 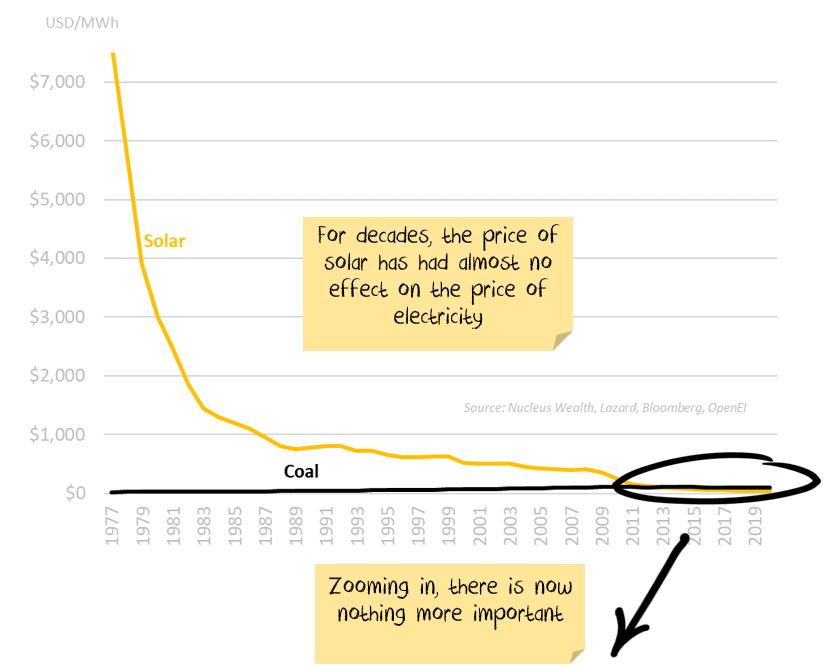 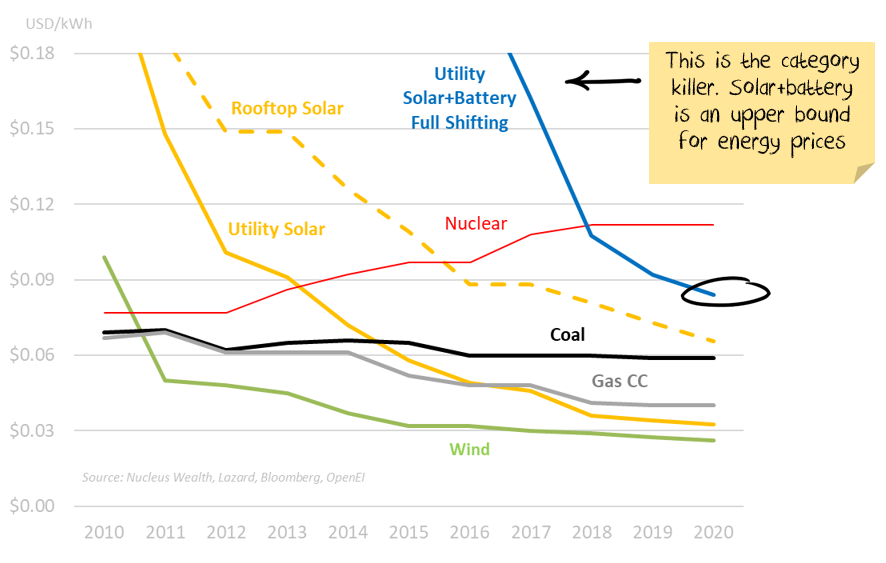 The productivity and income gains implicit in this are immense. Every bit as large as the steam and oil revolutions before it.

Any and every repetitive function in the economy is going to be inhabited by a robot. Everything from manufacturing to driving is in the cross-hairs.

Technological advancement will destroy jobs. But the productivity gains that come with it will lift incomes for both capital and labour. This will create demand and investment in new and more efficient segments.

There will be a major question about the disruption of job losses. Done well, part of the productivity gains will be temporarily used to transition those who have lost jobs into the new economy. Done poorly, soaring unemployment will create political chaos.

Either way, the forces are deflationary.

The road to lasting, rather than transient inflation

Inflation is too much money chasing too little goods or services. Short term issues like weather or supply chain bottlenecks do not create lasting inflation.

What can create lasting inflation?

As we predicted, it is easy for the market to believe rates are on hold forever when inflation is 1%. It is another thing when inflation prints 4%. Even if the 4% is a temporary number.

The inflation mirage has not finished. There are at least a few more months before inflation will fall. And the inflationistas are out in force.

This means the trick is maintaining enough inflation protection to hedge against continued inflation concerns, while we wait for the right time to take the opposite stance. The benefit is that if signs emerge that inflation will continue then there will be little lost in reversing course.

As the switch into value continues, the key for us is maintaining protection. Markets continue to be expensive and while the grind higher is likely, there are also considerable downside risks. 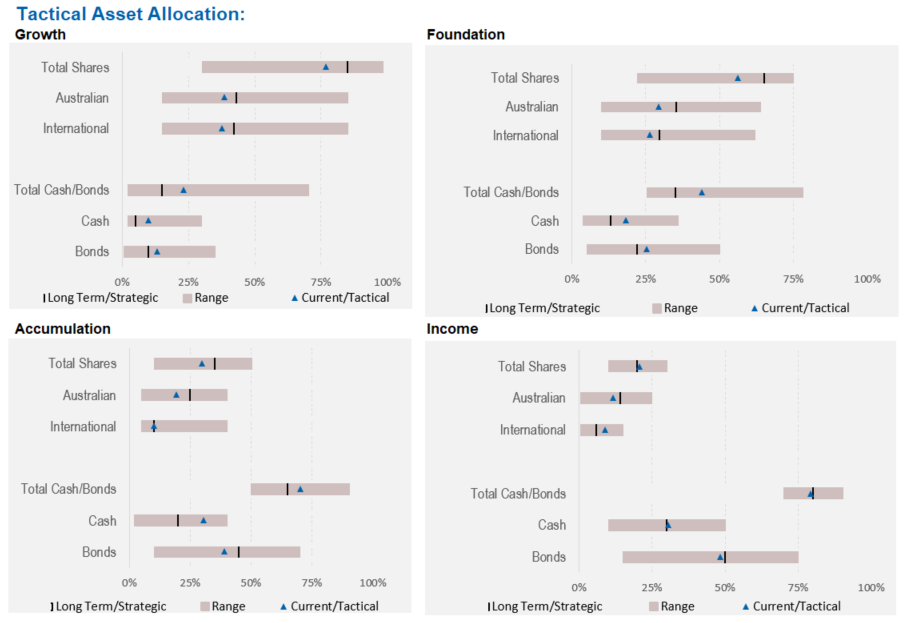 The equity market continued to climb over April, building on the March gains. Our Core portfolios produced gains but underperformed their respective indices, as some of our value plays took a breather, and growth stocks posted strong gains. We refrained from any major stock changes this month. 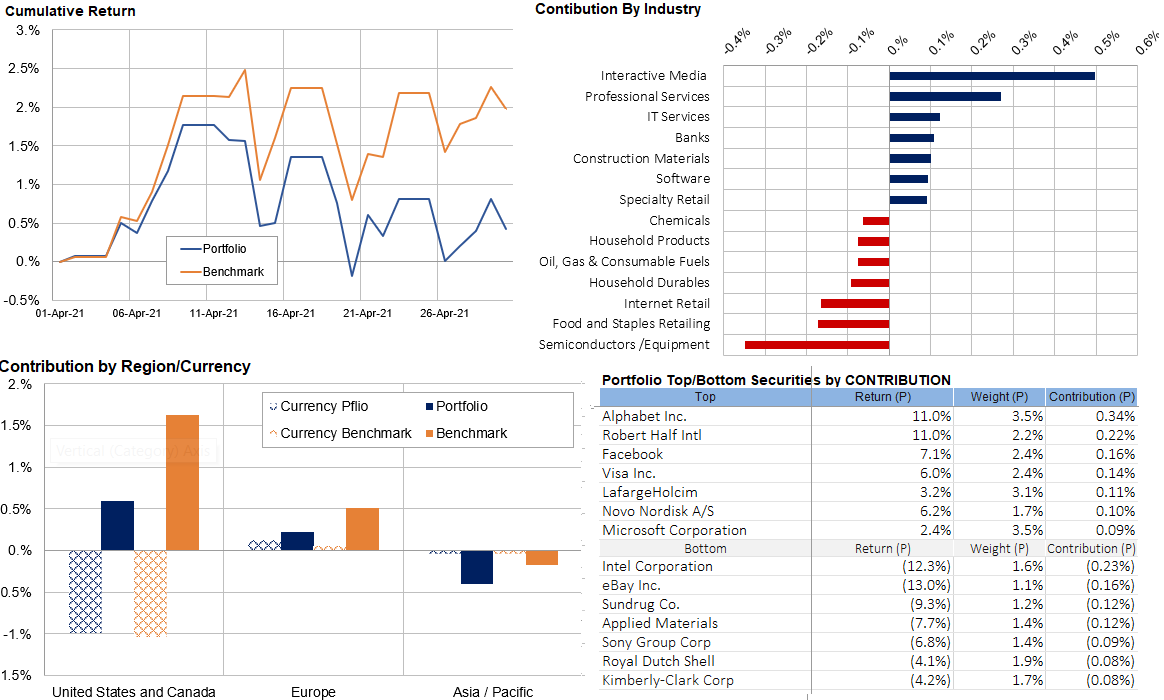 Our international portfolio saw a 0.8% increase over April. Some disappointing earnings results from Ebay and Intel were offset by a strong performance of Internet stocks. The currency effect was the opposite of March detracting from US returns but helping European performance.

The Core Australian portfolio underperformed the index this month as travel stocks faltered and our new USD earners suffered due to the currency headwinds.