During September the mix of the falling Australian dollar and increasing international equities saw all of our portfolios again outperform their benchmarks except the income portfolio. The international portfolio was the standout, up 4% for the month.

Last month, I ran through the key themes that are facing our portfolios:

On China, there was not a lot of news over the month. Activity still seems to be slowing, although the next few months are going to be more difficult to get an accurate read on economic activity as the Communist Party Conference in Beijing has led to the shutting down of a considerable amount of industrial manufacturing, in particular, steel production.

We would expect that some of the strong commodity prices in July/August reflected the bringing forward of production in front of the shutdown. Then, the weakness in September represents the shutdown, which we expect to continue for the next couple of months. Finally, there is likely to be a bounce in Q1 2018 due to “catch-up” production. So, the true trajectory is going to be difficult to ascertain accurately until we are through this period.

Our expectation is that China is going to continue to “glide” lower to try to normalize the capital expenditure to consumption inbalance that we discussed in our last monthly: 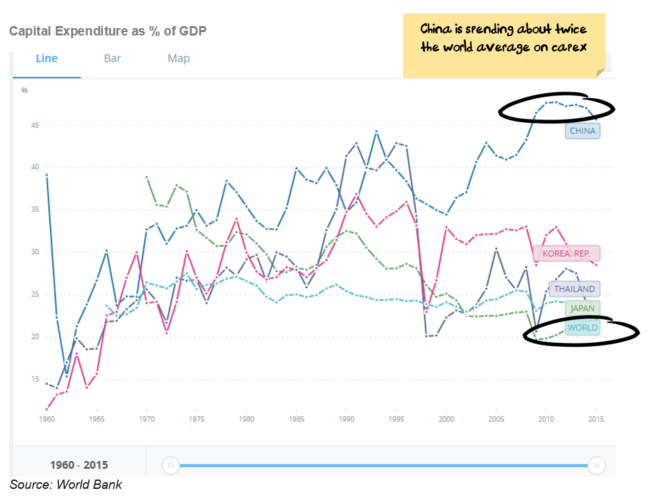 There is considerable uncertainty over the timing, the actions following the communist party national congress in October will be key – especially growth in Chinese credit.

In the US, there was incrementally more information on the Trump taxes, however, there is still little detail to assess.

So, we continue to play the boom but keep a sharp eye on the bust.

When running portfolios that represent core holdings, there is a focus on capital preservation and risk control over chasing returns. Part of the portfolio construction process is an assessment of both the probable path and the potential outcomes – we are looking for investments where when we are right we profit, but if we are wrong the consequences are not significant for the portfolio.

What this has meant over the last five years is that not only have international stocks significantly outperformed Australian stocks over the past five years but that they have done so with less volatility.

Now, I hasten to add that this is historical and relationships do change. But this is not a relationship that we expect to change over the next few years.

In our tactical portfolios, we own cash, bonds, international shares and Australian shares.

In early September, our trades involved continuing to switch European stocks for US stocks to take advantage of the rally in both the Euro and European stocks.

We sold a number of European stocks and bought more US stocks, in particular:

Based on growth and relative valuations, we are country agnostic at this point, if the USD keeps falling we will be looking to pick up more US stocks  – that is the market where the growth remains the highest but valuations are more expensive.

While “technically” we are underweight the US, many of the stocks we own in other markets have significant exposure to the US. Basically, we are finding stocks listed in the US to be relatively expensive, and so we have been looking to other markets to find stocks that are exposed to the US at a cheaper price. For example, Unilever is a UK listed stock, but Unilever’s actual sales exposure to the UK is only a little over 5% – its biggest markets are actually the US and China. Vestas Wind is listed in Denmark, but the US is its biggest market.

We have been hunting for value in non-Euro European markets in particular.

Defensives are expensive. REITs, Utilities, Telcos and Infrastructure are the usual places to look for defensive exposure but (just as the central banks intend) lower risk investors continue to “shuffle up the risk spectrum”, and they have bid the price of traditional defensive sectors to levels that make investment difficult.

So, again we have positioned the portfolio to benefit differently. We are looking for a mix of the more stable industrial, consumer staples and healthcare stocks to get a similar defensive exposure without having to pay the nosebleed prices in the traditional defensive portfolios.

We have been overweight a range of automotive stocks and suppliers. This was largely a value play as most of the sector trades on low multiples over growth concerns. This month saw a range of these stocks benefit on the back of increased demand:

We will likely lighten our holdings in this sector – it was largely a value play and with the strong performance it is becoming less so.

Our biggest call is underweight energy. In particular oil producers. We have blogged a lot about the oil price, (see this post, in particular) but the thumbnail sketch of the sector is that:

Having said that, it is a big risk to our portfolio being underweight energy. If there are geo-political ructions, particularly in the Middle East, we would probably underperform. September has seen a significant rise in the oil price, largely on the back of hurricane-related supply constraints, but we remain comfortable with our holding and expect much of this to be a short-term issue.

We are underweight financials – mainly as we can’t find US financials that are cheap enough to justify purchasing. We have been trawling the European banks for value.

We have a reasonable tech / IT exposure. Apple isn’t too expensive, but there are growth concerns – Apple gave up most of its August gains in September and the look like there could be demand issues around its new phone.

There are a number of smaller tech stocks that we own, in particular, a range of semiconductor stocks where we like the growth outlook. It is worth noting that part of the reason for Apple increasing the price of its latest phone is an increase in memory and components. This is a positive for semiconductor stocks more generally, especially if a “feature war” breaks out in the smartphone space. We currently hold a range of stocks that should be helped by this trend (Lam, Applied Materials, Skyworks, and to a lesser extent Cisco).

Click the below for a heatmap of stock performance in September:

The Australian share market generally continues to struggle. The Australian market fell in August, but our underweights to resources and banks and our overweights to internationally exposed industrials saw the portfolio up 0.1% vs a market that fell 0.1%.

We are underweight both banks and resources, and given the highly concentrated characteristics of the Australian market, we are overweight just about everything else.

We are only just managing to keep a number of the internationally exposed stocks in our portfolio – on a valuation basis Treasury Wines, CSL, Cochlear are all getting expensive after performing well in August.

Over the month we sold half of our Amcor holding, sold Ausnet and bought insurer QBE.

Finding viable replacements for expensive stocks is still the key issue in the Australian portfolio.

In summary, our view continues to be that Australian investors are better off holding international investments at this point in the cycle.  The past two months have obviously taken a big step in this direction, with international stocks providing over 5% in just two months. We believe this has a lot further to run, but it is unlikely to move in a straight line.

Register your interest now (if you haven’t already): Damien Klassen is Head of Investments at Nucleus Wealth.