Part of my investment thesis on China is that the underlying structural issues have been laid bare by the trade war. Regardless of any face-saving deal, the problems will not go away. China’s reactions to three events in the past week appear increasingly unhinged and are likely to accelerate the process.

China entered the World Trade Organisation in 2001 as a poor, authoritarian country with promises to become less autocratic and the chance to become less poor.

Over the next 18 years, China managed to get itself into an incredible position – critical supplier to the world without liberalising its political system. The USSR never managed this trick, and it actually became a democracy (for a short time at least).

Trump didn’t start the trade war as a defence of freedom and to limit the risk for companies though. He just wanted to get the jobs back for the poorer voters in the US, the casualties of China taking over low-end manufacturing.

China’s problem is it wants to escape the middle-income trap. To do so, China needs to move up the value chain and take tech leadership. The US doesn’t want to give up tech leadership.

Scientific breakthroughs and tech leadership tend to come through a liberal society that encourages freedom of thought and challenging the status quo. So, China is already facing structural issues on that front.

To achieve tech leadership, it is alleged China has been stealing tech secrets and forcing technology transfer on companies who operate in China. A range of articles appeared over the last year, highlighting spying, surveillance and corporate theft to support that view. It would appear these have been part of a co-ordinated leaking process by Western governments and spy agencies. I expect these were designed to bring these issues to the forefront of corporate decision making.

With the spying laid bare, there is a serious problem for Chinese technology. Let us say you are the Chief Information Officer at a major multi-national with corporate secrets and customer details to protect. Five years ago, the question was: do you buy hardware from China for 15% cheaper than the same equipment from Japan or the US? Now, the question is: do you buy potentially compromised hardware from China for 15% cheaper? There is a big difference.

There may well be a deal coming. Any deal is likely to be cosmetic only.

China wants tech leadership, liberal democracies are not willing to give it. Why rely on sensitive parts of high tech equipment to a country with a history of spying on / locking up its own citizens?

Trump has already set the ball in motion. Multi-nationals have started a decade-long process to make China less of the supply chain. These processes are unlikely to be reversed.

So, you would think China’s best position would be to try to get the world back to thinking China is not a threat. Lie low, make comforting noises about becoming less authoritarian.

Instead, in the last week alone China has chosen to:

But now there has been a backlash to the backlash, suggesting China has very much overplayed its hand.

A range of politicians from both sides of the US political spectrum lined up to decry the NBA’s first weak attempt to appease China. Now it has blown into such a significant issue there is little chance that the NBA will back down. A backlash against Activision is also starting to grow.

Regardless, these are yet more signs of the fundamental problems in the US-China relationship.

Australia: Caught in the middle

Australia has also been managing a delicate political process, how to profit from China by selling commodities but maintain a close relationship with the rest of the democratic world. We will likely be forced to choose one or the other. My expectation is Australia will choose democracy over profits – but there are be plenty of vested interests urging the opposite.

How should you be investing in this environment

In our Nucleus superannuation and investment portfolios, clients who have strong ethical concerns can exclude stocks that don’t meet their views. This includes Human Rights or democracy issues, helping with ethical superannuation investing: 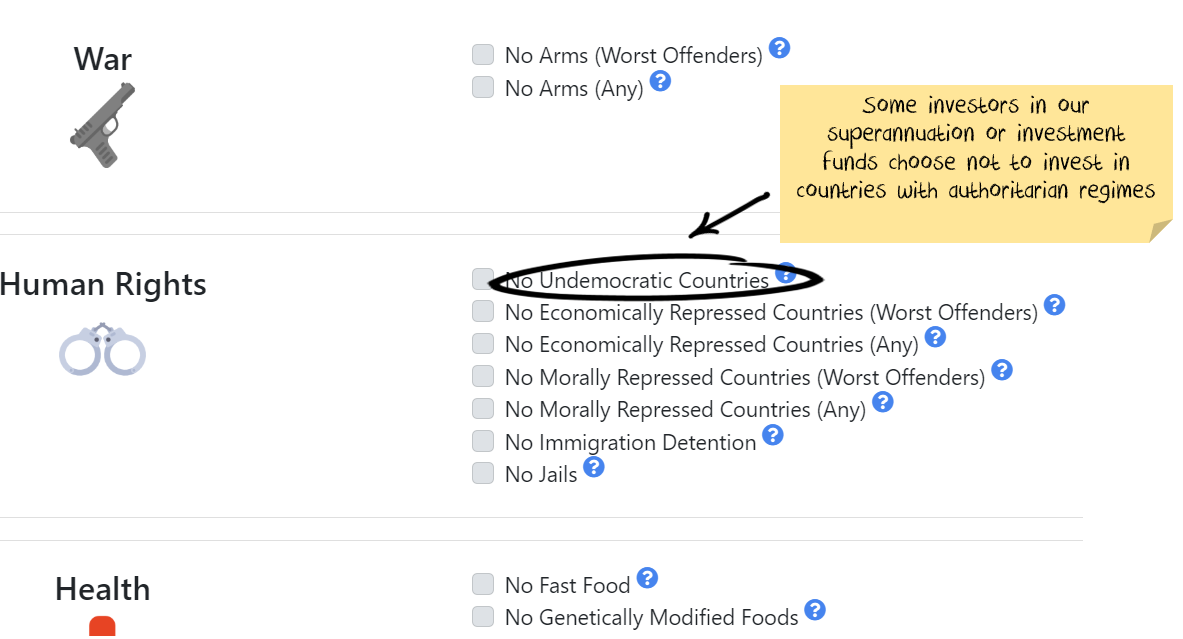 From a stock selection perspective, it is about trade-offs. The key questions we have been asking of our stocks for the past year:

An example of the type of investment theme we are targetting is companies involved in factory automation. As companies increasingly move supply chains out of China, we believe that the process of automating factories with robots will be accelerated.

There has been a range of warnings from Trump about the problems of doing business with China.

However, it seems as if the loudest warnings about doing business with China are now coming from China itself.