Chant West finally released its returns for superannuation funds for last month. Our growth fund smashed the median fund by 9.4% in March, courtesy of our aggressive move out of shares at the end of January. Our other funds also considerably outperformed their benchmarks. 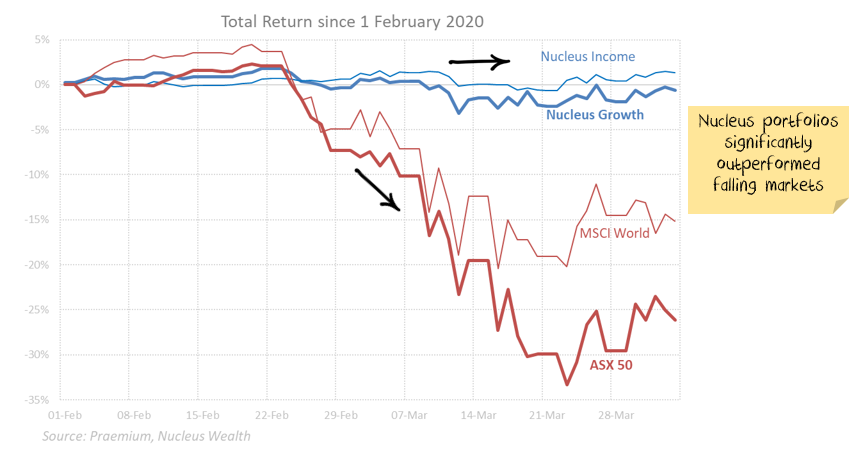 And those results don’t include the “massaging” of unlisted asset valuations by many industry funds.

Because unlisted assets are valued less frequently than their listed counterparts, some commentators are describing their current values as artificially high. We would argue that, on the contrary, unlisted valuations are generally a better representation of fair value than listed market valuations which are often influenced by investor sentiment. We know that listed markets tend to overshoot in good times and undershoot in bad times, so in a crisis this can drag prices down a lot further than where they should be…

…These revaluations have typically resulted in write-downs of between 6% and 10% for property and infrastructure [Nucleus: listed market losses were closer to 30%] and up to 15% for private equity. The reason those revaluations are not as dramatic as we’ve seen in listed markets is that the process is unemotional.

Let’s unpack that. I think the argument is that hypothetical prices based on numbers in a spreadsheet of an industry fund are more accurate than the billions of dollars traded on global markets. Which means, if you are in an industry fund, your March superannuation contribution got to buy unlisted assets at a 20% premium to the same assets on the stock market. But your overpayment was unemotional.

Once again, any performance comparison at the end of March must be treated with caution since some funds have devalued their unlisted assets, but others have not. We expect further revaluations over the next few months.

Which means any further contributions will also get to buy unlisted assets at inflated prices. 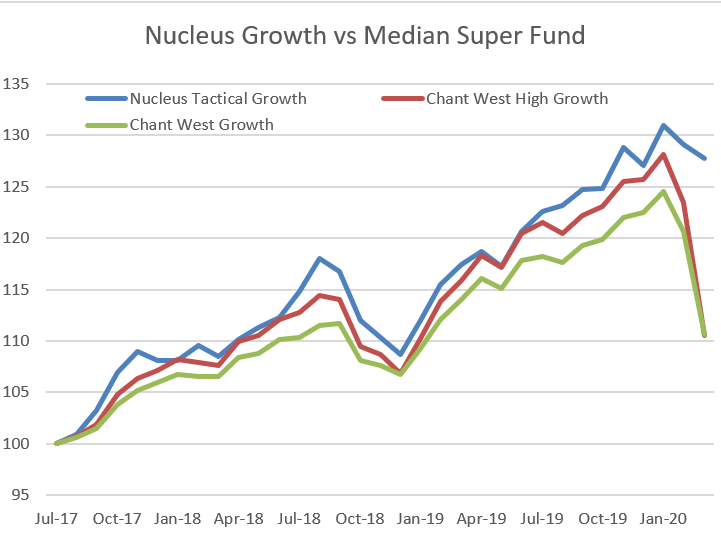 As the Coronavirus crisis escalated in China, elsewhere January saw an acceleration of the Everything Rally, where all asset classes were appreciating: Equities, Commodities, Gold, and even Bonds. Given we already viewed valuations as stretched at the end of 2019, by January end we believed downside risks were significantly increasing and started to reposition into more defensive assets. The reports of a cluster of Coronavirus cases in Northern Italy in early February was our catalyst to take a more significant defensive stance. The figure below shows our Tactical repositioning of the Growth Portfolio as a response and the consequent March Quarter performance of those asset classes for our investors. This flight to safety, especially US$ assets, meant our portfolios essentially weathered the precipitous drop over March. 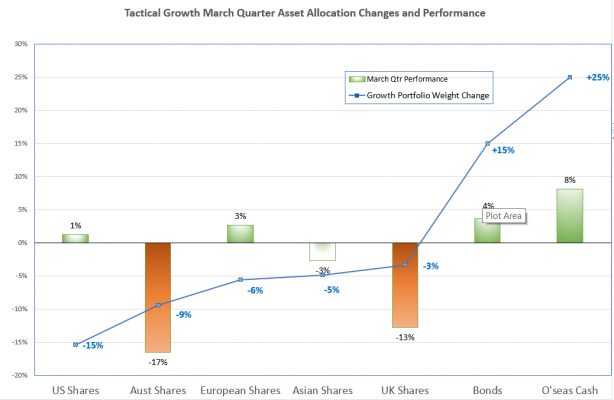 While our asset allocation sheltered our tactical portfolios, our stock selection targeting defensive sectors meant our Core International and Core Australian Portfolios outperformed their respective indices.  In the Core International portfolio we shed our banks, airlines and logistic companies and up-weighted our Health Technology (Drugmakers), Non-Durables (tissue/hygiene product suppliers) and Gold producers. Our aversion of the Energy Sector also meant we were largely unaffected by the Oil Price rout that also occurred over the period. The chart below shows the relative overweights and underweights of our Core International Portfolio vs the MSCI World ex-Australia. Overall our Core International Portfolio lost 1.4% over the March quarter vs -9.4% of the MSCI World ex-Australia Index. 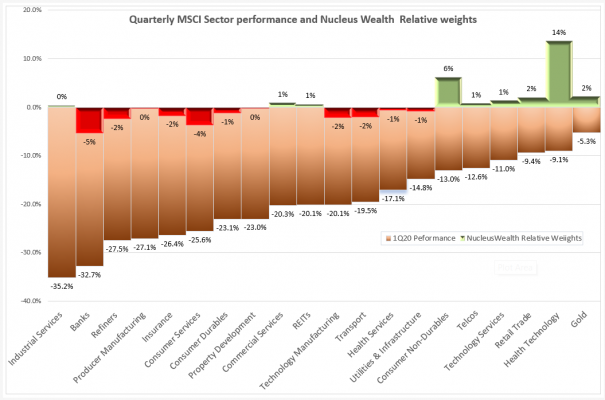