Investment markets are in the eye of the storm. The initial storm danger came as COVID-19 hit, decimating jobs and smashing demand. Governments and central banks ably stepped up to stem the damage, and investment markets calmed. But insolvencies and bankruptcies have only been delayed, not avoided and the employment recovery is unlikely to be quick. The eye of the storm is not as safe as it appears.

Over July, our direct equities continue to outperform, our Australian fund in particular beat the index by 1.4% over the month on the back of an overweight position in gold. Our tactical funds performed slightly lower than the average superannuation fund over the month, but the annual performance remains significantly higher.  Over the month we took profits on a number of our long term bond positions. 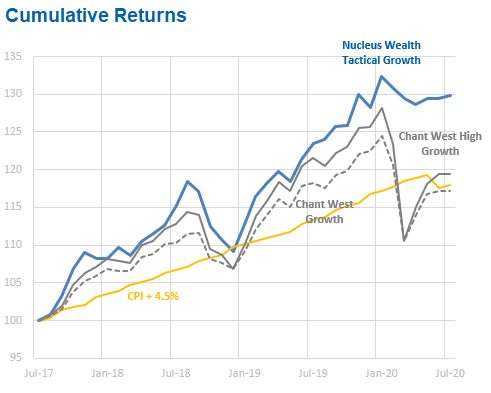 And our direct equity portfolios also significantly outperformed their benchmarks:

At the risk of sounding like a broken record, the dynamic at the moment is as strange as it has ever been. I have spoken before about the best argument for buying stocks is the ironic case that capitalism is dead, and therefore buy equities. Disconcertingly, there continue to be signs that this is the case.

Governments around the world made significant changes to bankruptcy and property eviction laws.

When the crisis was expected (hoped?) to last for only a few months this was good policy – there is was no sense in shutting down companies due to short term demand issues or kick people out of homes for short term job losses. And the changes have worked: 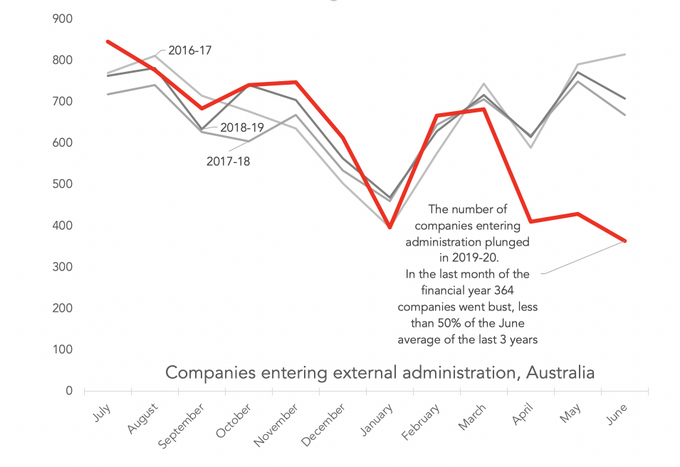 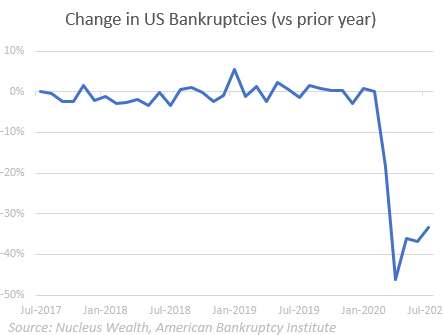 Which is where the disconnect lies. Australian bankruptcies in the June quarter were down 42%. The US is down around the same. Europe is seeing similar effects. The number of unemployed is 50% higher than the start of the year in most countries. There is clearly a tension that needs to be resolved.

It should be clear now that COVID-19 is not a 3-month “blip” but rather a longer-term structural issue. Now it becomes a question of whether the cure actually turns into the problem.

Some jobs will never return

A Melbourne based specialist delivery company has a niche delivering to hospitals and hotels. Revenues down 75%+. Profits up 50%. Most of the profit increase is JobKeeper. But the owner has also torched middle management and worked out clients are just as happy with larger deliveries less often rather than smaller deliveries more frequently. And so productivity is off the charts. As revenues recover, the middle managers will not be getting their jobs back.

This is just an anecdote from one company, it is not data. But economic history shows a similar effect with businesses across the world. That is what recessions show us – jobs lost take a long time to re-appear. Many older workers will never work again.

Capitalism has bankruptcies for a good reason

There is a good reason for bankruptcies and evictions. When people or companies get into financial difficulty, bankruptcy gives them breathing space by cancelling interest and allowing them to resolve the problem. It forces them to reset their obligations and to come up with a plan to extricate themselves.
Just as importantly, it alerts suppliers, employees and other partners to the problem. The reason this is useful is that without bankruptcy, companies and people can simply use up credit with one supplier and then switch to another. If this is allowed to go on, then the suppliers start to go broke, and it creates a domino effect of economic issues.
Evictions are similar. Say someone cannot afford a $1,000 a week rental/mortgage because of job changes but could afford $600 per week in a different suburb. How long should they be allowed to stay in the $1,000 per week house? The longer that person is allowed to stay, the more likely it is that the landlord also goes into financial stress. Or, the bank has to reduce lending elsewhere,  creating another domino effect.
Keep in mind that for the most part, rental debts or interest is still accruing, the burden is getting larger and the capital smaller. These are highly emotional issues, and in both cases, we absolutely need a safety net. But, a small debt can conceivably be paid off through a restructure. In contrast, larger debts become all but impossible to pay.

Cruel to be kind?

Say you have someone who is bankrupt, owing $25,000 to a range of credit card providers, utilities and landlords. If they go bankrupt or are forced to sell their house, then it can be a devastating event. But if the jobs are not coming back quickly then if you give that person six more months, then compounding interest and more bills might turn the amount into a much higher figure.
For the borrower, it is far crueller to be under six months or twelve months more emotional and financial stress. During this time they go from a small debt to a far larger debt while hoping for “something to come along” to fix the problem. Better to bring the issue to a head earlier.
For the debtors, an early resolution is also much better as each debtor has a lower exposure and might get paid out something. At high debt levels, individual debtors end up with almost nothing.

How long can capitalism be suspended for before it becomes a problem?

So there are two competing macroeconomic effects.

Governments were hoping for a short sharp shutdown and recovery, or a cure or a vaccine. It didn’t happen.

That politicians will take option (b) way more often than more sober observers would prefer.

The rules are rolling off around the globe, my expectation is that this will create at least some sense of normalcy. But there are already countries extending provisions until the end of the year or beyond. Which makes it difficult to assess when the eye of the storm will pass, and the second half will begin.

There is an alternative possibility: that markets are now entirely dependent on central bank support, so economics and fundamentals no longer matter.  We have a checklist of a dozen decisions that governments and central banks can make that will eventually suspend capitalism.

A few of the items have already been checked off the list. The more that get implemented, the closer we get to a genuinely new paradigm. But, we do not believe this to be a likely outcome. The steps taken must become increasingly radical: effectively central banks and governments bailing out and propping up most failing businesses, turning the world’s capital markets into a herd of state-owned entities that will ‘kill the village in order to save it’.

The economic and virus progress has mainly been as we expected. So, our asset allocation and superannuation portfolios remain conservatively positioned.
In the direct holding stock portfolios, our virus-sensitive positions have driven outperformance. Since the crash, we found value in commodities. First oil, then iron ore, and now gold miners. We remain very wary of banks. However, the economy and the stock markets have disconnected. The stock market is at valuations that discount no risk. 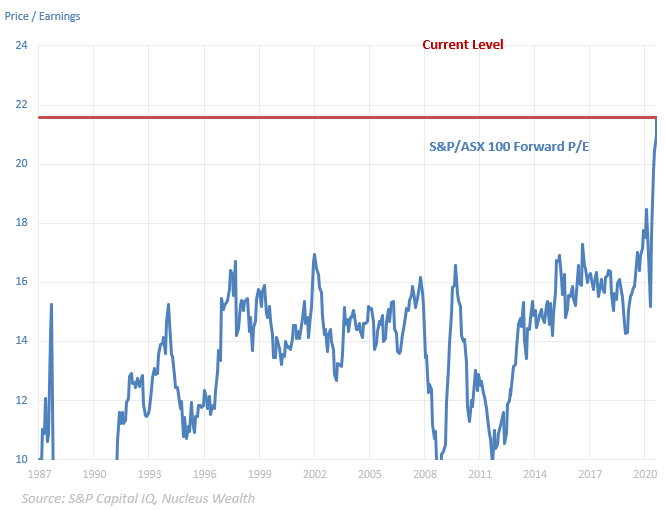 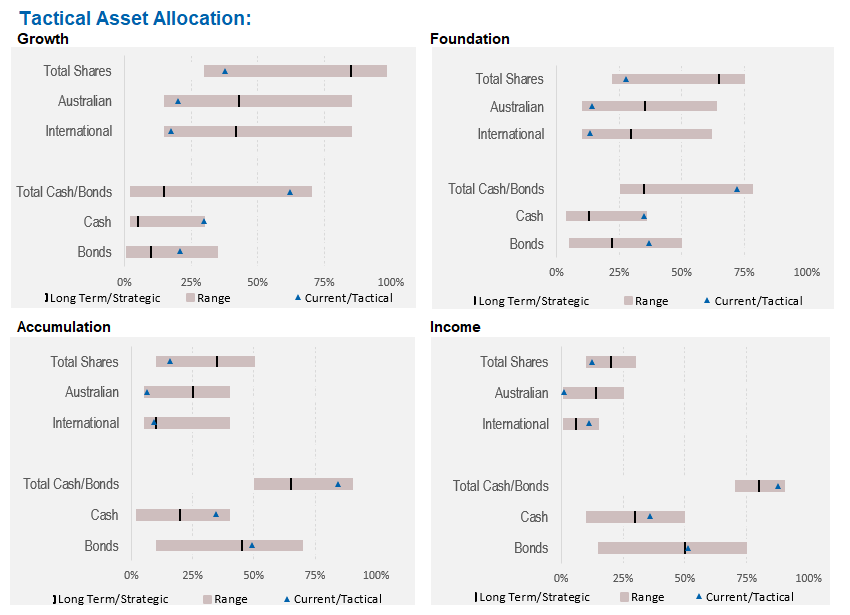 We changed most of our quant models a few months ago to put much less focus on the last 12 months of earnings, or the next year. The focus instead is on a mix of inflation-adjusted historical earnings and the earnings from the second year of earnings. The problem with this is:

Which is an indication of the environment. You have to understand the limits of your models. The key to navigating as we exit the eye of the storm will be to not lose track of the principles of good investment while changing models enough to reflect that times are not normal.

We have a shopping list of high-quality companies that we want to own for our investors at lower prices for the very long term. Which is easier said than done. We picked up a few in March, but the problem with these companies they also bounce back the fastest once panic subsides.

Given a toxic mix of low-interest rates, volatility and expensive markets, investors will need to be significantly more nimble than in the past.