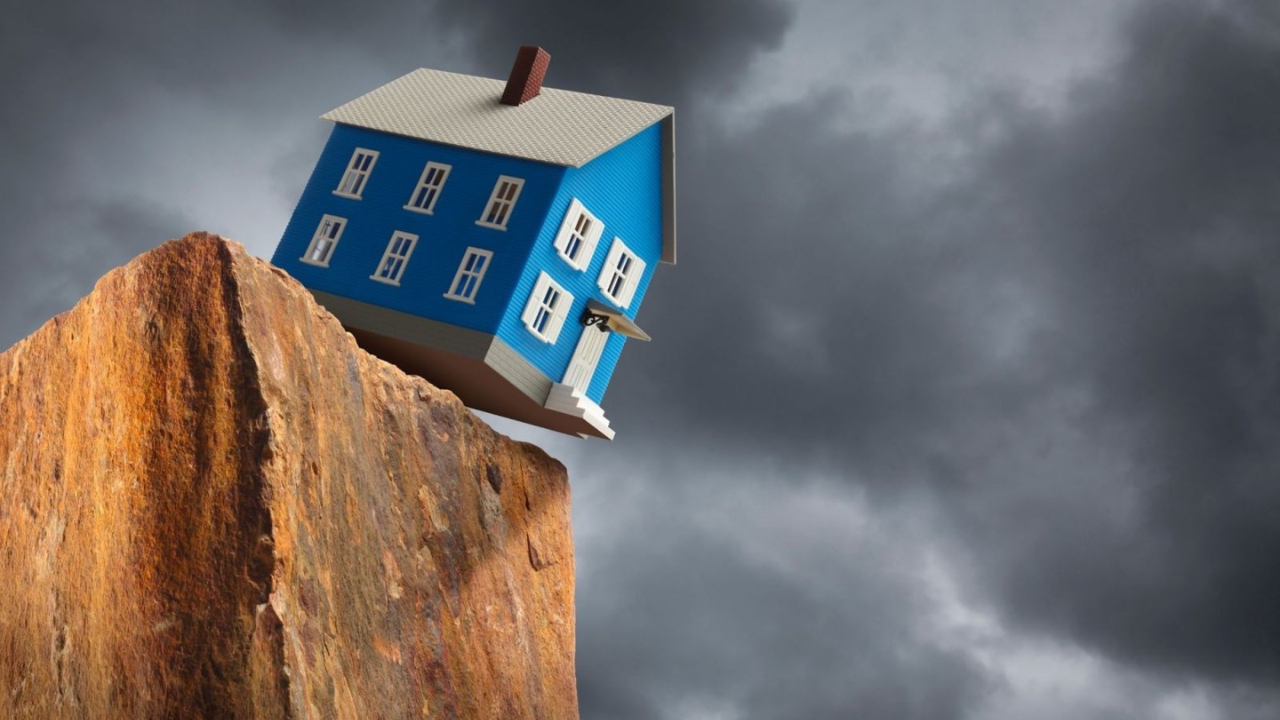 In terms of mortgage payments, a 40%+ increase in one year is higher than any other time since the 1970s. The RBA has started to express some doubt over further rate rises, but the market is expecting another 1.25%+ of rate rises. 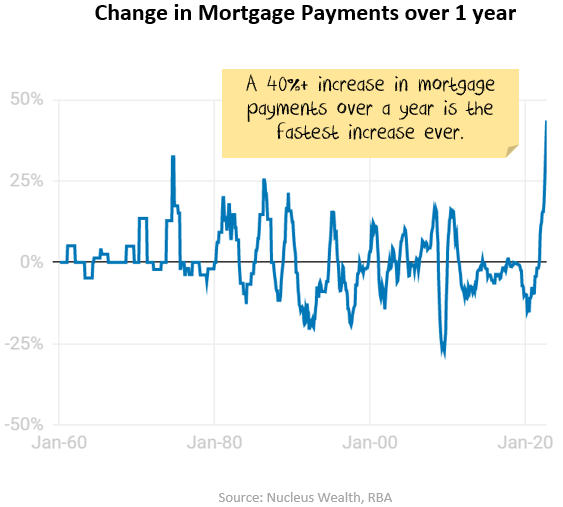 Affordability was already as poor as it had ever been in some markets before the rate rise.

Housing valuation and affordability statistics worsened over September. For investors, rental yields improved a little as rents rose while prices fell. But yields are still very low vs history, and interest rate rises would have swamped any gains for investors looking to borrow.

Markets are pricing in an extraordinary 7%+ mortgage rates over the next year. That would double the 2021 mortgage repayments for a 20% deposit mortgage. Given Australia has (a) the second most indebted consumers in the world and (b) mostly variable interest rates, it seems unlikely that interest rates can rise that far without crashing the property market before that.

What are the limits to house prices?

Valuing the overall housing market is difficult given the rise in Australian house prices over the last 30 years. But there are limits. If house prices grow at 10% p.a. for the next 20 years, and wages/rents kept going up at their historical rates then:

That is not a realistic vision of society to me. So, we created an Australian property market calculator to help investors or potential homeowners determine the returns on Australian property. The idea we want to illustrate is that there are a number of key inputs into housing valuation. Interest rates are the most important, but the other limiting factors are: 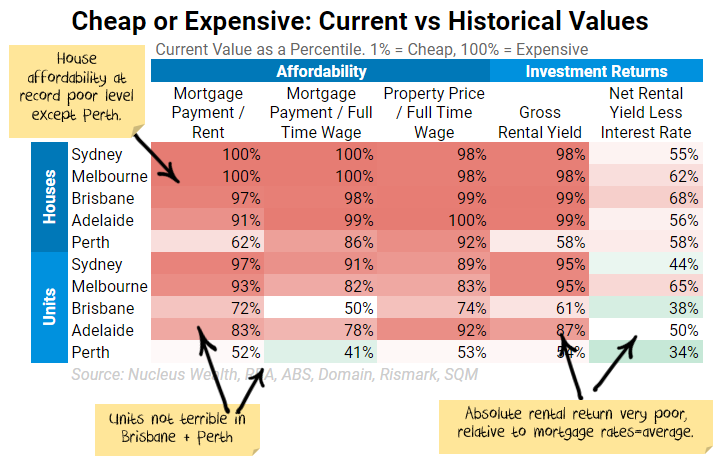 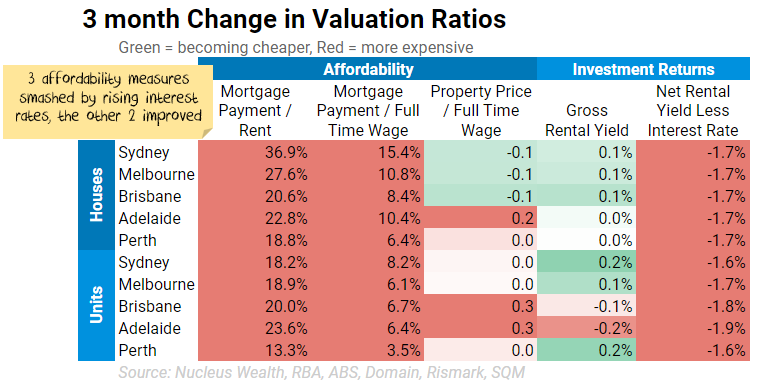 Detailed charts for the above locations can be found in the property detail update. For more on how and why we use these ratios see our residential real estate forecasting methodology.

Waiting for the effects of rate rises

CBA economist Gareth Aird has an apt analogy of the person at the bar who has just downed 5 shots in a row but doesn’t feel drunk yet. The effect is coming; it is just delayed.

The delay is in four parts:

The net impact is that the valuation ratios we have included in this report reflect the latest interest rate hikes announced by the central bank. The economic impacts, and the impact on house prices, are largely yet to come.

When you adjust the factors in our property market calculator, you find that with higher interest rates, you would have to put in never-seen-before valuation ratios for house prices not to fall. 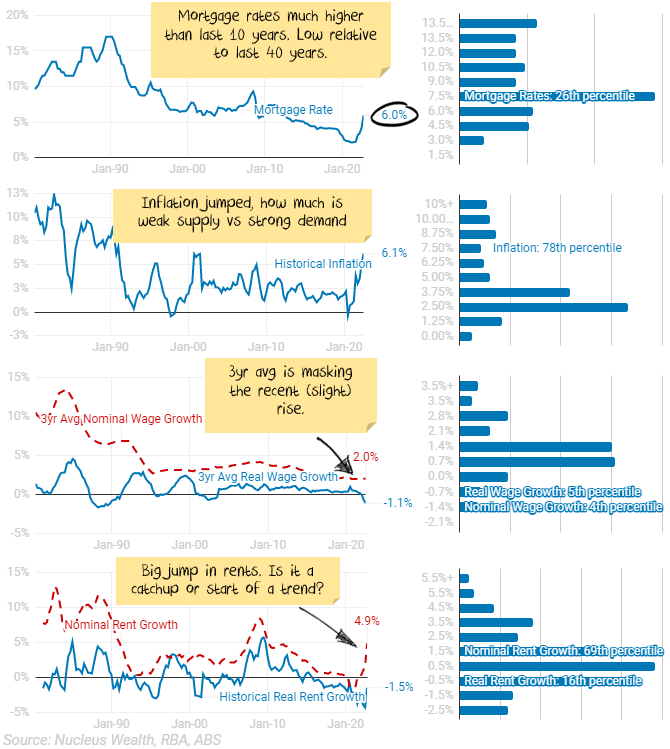 Property prices have clearly started to fall in the more up-to-date data. Interest rates now rapidly rising and the RBA is talking about more.

In my view, rising rates will trump the other factors, but many opposing forces are at play:

On the one hand, plummeting immigration, pandemic disruptions and the end of eviction/mortgage payment moratoriums aren’t helping. A boost in supply is in progress, spurred by new home building. But property developers are falling over left and right, caught between rising costs and fixed-price contracts. Rental growth jumped again this quarter, but the last few years have been very weak. And Australia starts with a larger private debt burden than just about any other country.

On the other hand, we have a burning political desire to keep Australian property market prices high and pump more debt into the economy. Wage growth is low, meaning the interest rate rises that the market is pricing may not eventuate. There is a structurally higher demand for houses vs units due to the fear of more lockdowns. There is a structurally higher demand for bigger houses, more rooms or fewer housemates given the move to work from home.

Rising rents and falling prices are usually a sign to start looking at the property market. But with the speed of the interest rate rises already and more to come, it is likely going to be more prudent to wait.  Keep in mind that interest rates take some time to take effect. If the RBA is wrong then they might not realise it before a recession is already here.  The most important issue right now is interest rates.

Nucleus Wealth has compiled this data using a range of different sources.

We use Domain for more recent data quarterly property prices and rents, cross-checked with SQM to fill any short-term moves. Older information is from Rismark and the Australian Bureau of Statistics to fill time series.

For economic data, we use either Reserve Bank of Australia or Australia Bureau of Statistics data. For older data, we have had to estimate some factors due to differing definitions over time.