I wanted to talk about the Australian budget. I’m not seeing what the admirers are seeing. At first, I was worried that I’d missed something. But yesterday’s dovish speech by Governor Lowe suggests the Reserve Bank are seeing exactly the same thing I am.

Four months ago, I wrote what good government stimulus would look like. This budget didn’t tick many boxes. Don’t get me wrong, the fiscal cannon is large enough to help. There is enough ammunition loaded into the cannon. But, it has been pointed in the wrong direction. Which means it will likely need to be fired again within the next 12 months.

Supply Side or Demand Side?

The budget has a huge focus on supply-side support. Supply is not the problem! Everyone has spare capacity. Demand is weak and needs help, not supply.

Giving money to companies to hire more workers when the existing workers are not at full capacity is not going to help. Giving companies tax credits to buy new equipment doesn’t help if the old equipment is running at 60% capacity.

We don’t manufacture in Australia anymore

So why do we want to give tax credits to companies to spend on capital? This expenditure will be heading directly offshore, helping other countries. 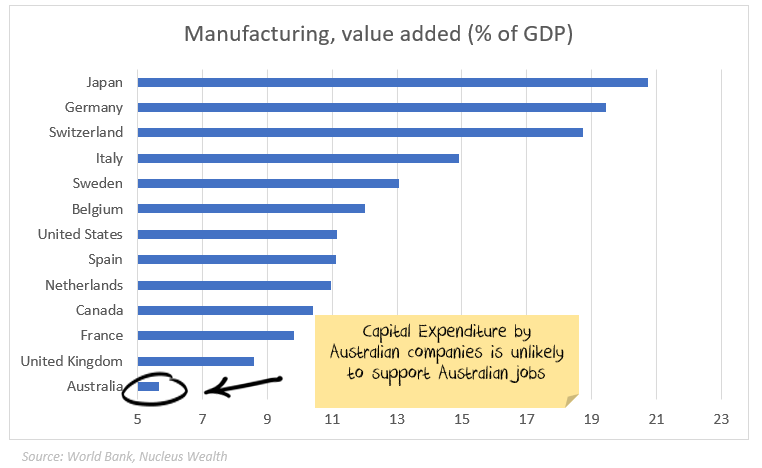 $30b on company tax incentives and another $1.5b on a Modern Manufacturing Strategy is a noble endeavour. But that money is going to buy Chinese, Japanese and US robots. I’m sure those countries will be grateful for the demand. Australian taxpayer-funded stimulus payments should really be targeted to support Australian jobs.

Isn’t an increase in capital expenditure going to reduce employment?

Some companies do have a good reason to spend on capital. The reason is to automate processes so that they can reduce staff.

This is not really what the government should be going for when staring down the barrel of the highest underemployment stats of the last 90 years.

COVID is looking increasingly like a marathon. Australia came out of the gates sprinting, we’ve now dropped to slow to a walk. In three months’ time, it will be a crawl.

The insolvencies haven’t happened yet. Another wave of infections is hitting Europe and the US. Demand has not recovered, even in largely virus-free countries. It is too early to congratulate ourselves on a job well done.

Where is the budget support for structural change?

The Australian economy was heavily reliant on education, tourism and population growth. None of those will return quickly.

So, you would think there are two choices:

I’m not sure which policies are designed to do either. There are some token amounts. But I’m not expecting the average (former) waiter or airline stewardess to transition seamlessly into a robotics role as part of a Modern Manufacturing Strategy.

The paradox of thrift

On one hand, the Australian budget takes away money from those on JobKeeper and JobSeeker who are most likely to spend the money.

On the other, it gives tax cuts to higher-income earners who are likely to save it.

I’m not going to argue the social case for or against. But the economic case is that already weak demand is about to be dealt another blow.