The data quality showing the spread of the coronavirus is poor. The data from the Hubei province (the origin of the virus) is still wildly different from the data from elsewhere and so we need to analyse the data in separate parts. While the numbers don’t look as bad when analysed this way, I note the economic impact is driven by the number of shutdowns and quarantines, not by the number of cases.

I generally separate the data into three parts: (a) Hubei (b) the rest of Mainland China (c) the rest of the World for analysis.

See this recent post or this podcast for more detail on the investment impacts. My core thesis is the economic impact of the virus is not particularly related to the number of deaths but more related to the measures.

I note already the travel bans and quarantine measures exceed anything implemented with SARS in 2003.

It is pretty clear from this chart the deaths in Hubei are on a different scale to the rest of China: 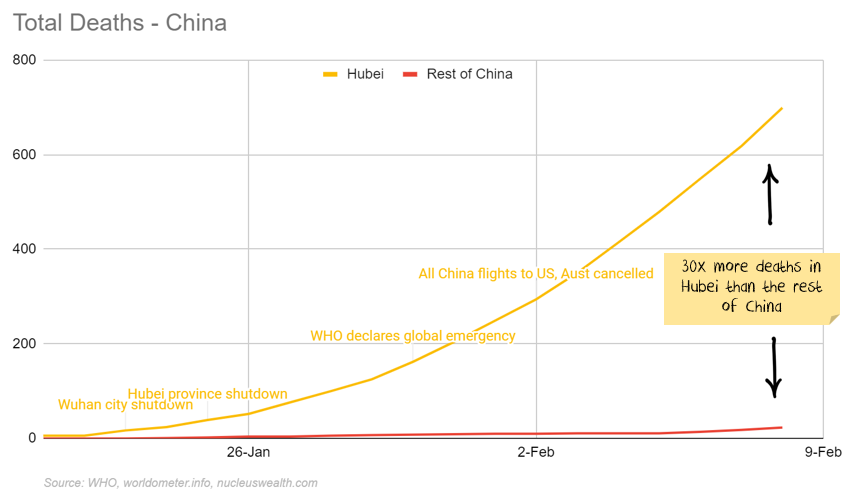 So, it seems suspicious that the number of cases in Hubei was roughly the same as the rest of China two weeks ago, and still only a little more than double.

Some of this may be a lack of test facilities, some of it may be a bureaucratic cover-up. Some might be that hospitals are over-run in Hubei and so can’t give the same care as elsewhere. Or, maybe there is a different factor creating this issue. 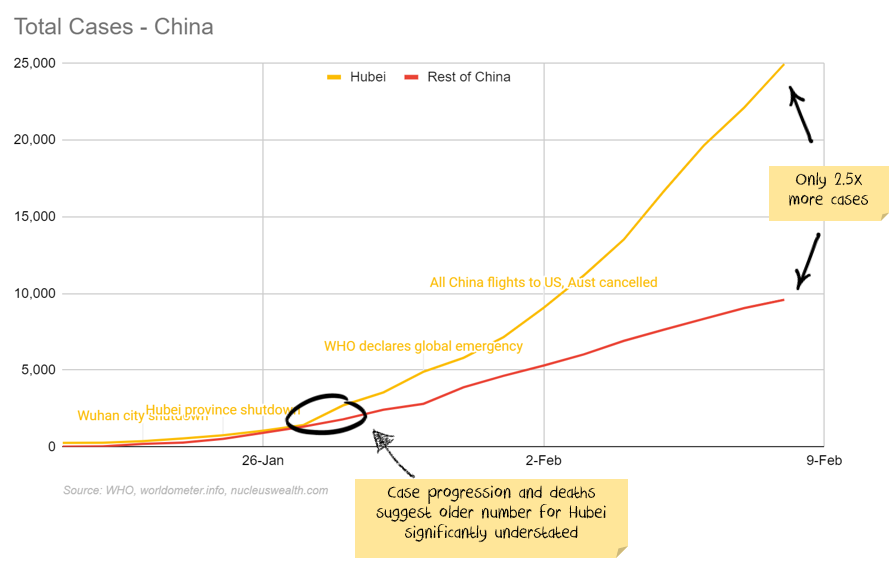 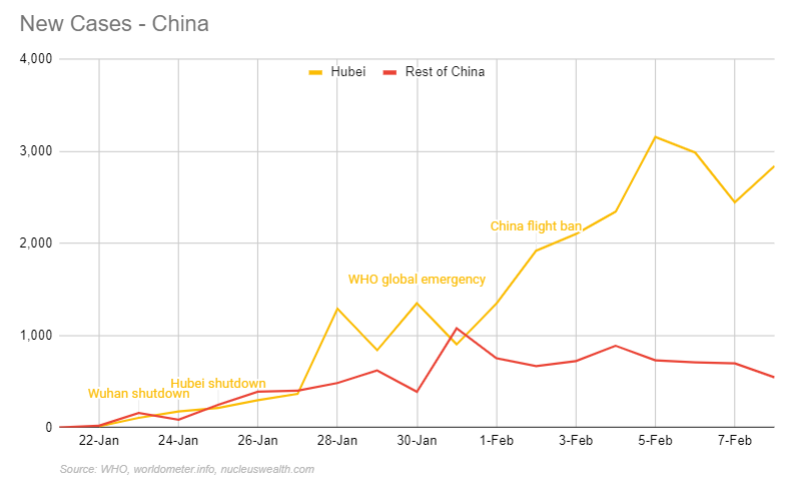 The numbers for the rest of the World are still tiny. And, in reality, aren’t a measure of cases elsewhere as much as they are of travellers bringing the virus with them. 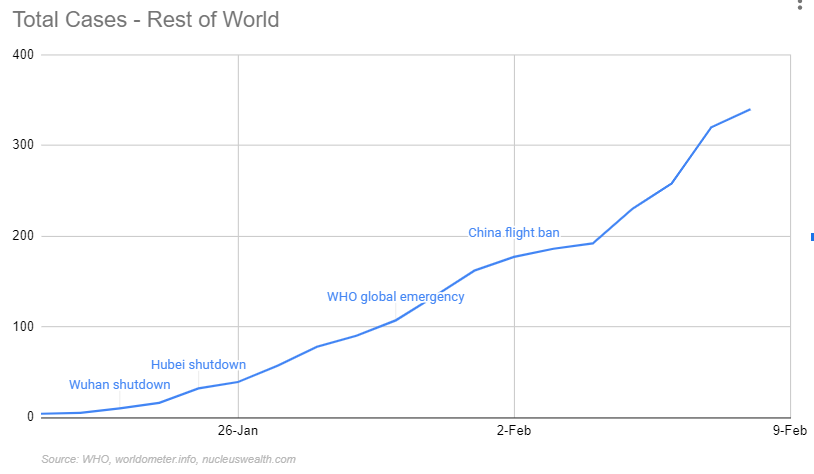 The mortality rate is where we can see distinct differences in data. Dividing the number of deaths by the number of cases during the early stages of an outbreak is very misleading. People who were diagnosed today with the disease are still alive, but they still might die from the disease in the coming days.

A better way is to compare the current deaths to the number of cases from “x” days ago. We still don’t know how many days we should be looking back. The stats so far suggest that the median days from the first symptom to death is 14. But with a broad range from 6 to 41. And, we don’t know how long on average after the first symptom a person would take to become a case.

The below charts show the death rate if the right period to look back is four days, eight days or 12 days. Using data without Hubei, a mortality rate of somewhere between 0.5% and 3% is likely. 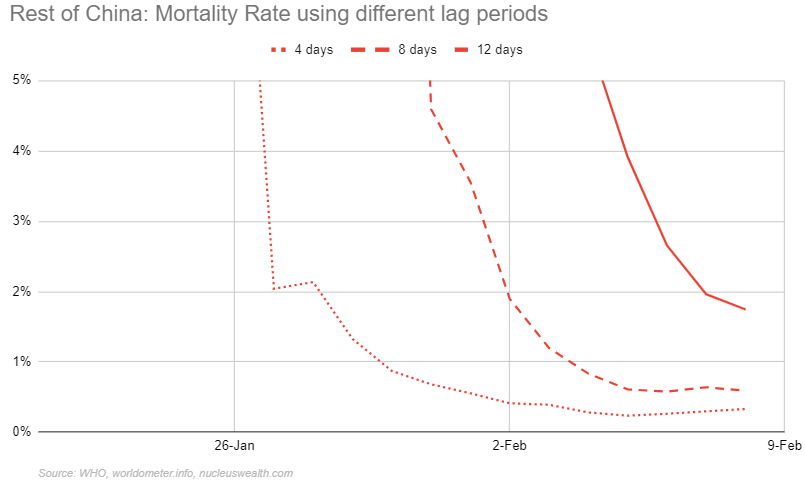 The Rest of World data is similar but with only 2 deaths is of limited confidence. 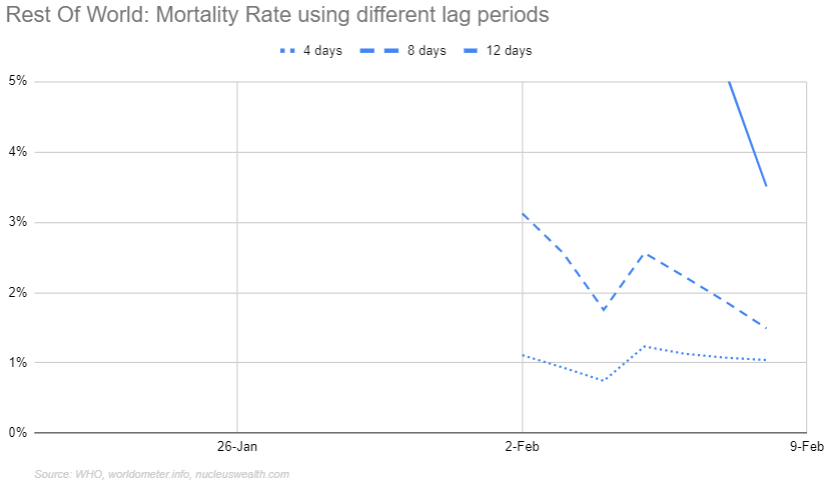 Using Hubei data suggests the mortality rate is somewhere between 10% and 50%. This seems improbable – to put it mildly. If we trust the older Hubei data, there are now more people dead than what there were cases 2 weeks ago. 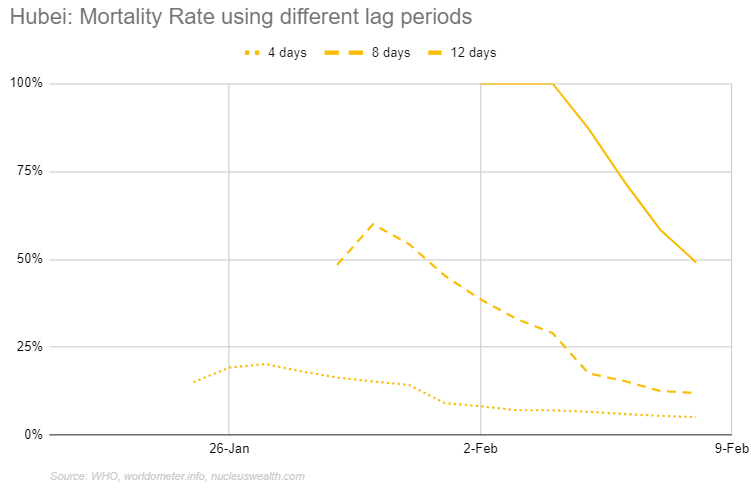 Keep in mind that almost all “rest of the world” cases so far are really Chinese cases that have travelled. It will be weeks before we know if there will be outbreaks outside of China that will need quarantine measures.

The number of cases within China is probably over 200,000 already – significantly higher than reported.

When looking at any coronavirus data, I recommend separating the data before analysing.

Even given data issues, it looks as if the mortality rate outside of Hubei is much lower than in Hubei.

The good news? This probably means that, with good hospital care, the disease is much less dangerous than first feared.

The bad news? The disease spreads quickly if unchecked – a single Japanese cruise ship makes up around 20% of all cases outside China. Once hospitals are over-run, like in Hubei, the mortality rate probably jumps significantly.

The net effect is containment is extremely important. Which means extensive shutdowns and travel bans are likely to stay in place for months.  Which means a significant economic impact.