Most superannuation funds, and especially industry funds have significant balances in unlisted assets. Many are telling you that these assets haven’t lost money, or are only down a little despite sharemarkets being down close to 30%. This gives rise to perverse incentives for superannuants:

Rough numbers? I suspect right now that the median superannuation fund will pay you about 7% to leave.

Disclosure: Some of this is probably sour grapes! I run a superannuation fund that only buys liquid assets in separately managed accounts. So, an investor’s return is their return. We can’t rely on tax mingling, unlisted asset revaluations or other accounting tricks that master trusts use.

Chant West gave us a quick preview of superannuation fund returns for March:

Chant West’s definition of a growth fund is one that has 60-80% of its assets in growth equities.

If shares are down “at least” 27%, cash is unchanged, and a composite bond fund is down about 5%, then the implied return is a loss of -20%.

Chant West says the loss is only 13%.

And that assumes that the 25% is in composite bonds, more likely it is higher risk unlisted assets.

So where is the missing money?

Now, individual funds will have different performance obviously. Our own growth fund is down less than 1% over the same time frame, but we took dramatic and aggressive measures at the end of January that I know others did not.

The superannuation market is $3 trillion. It is the market. If, somehow, almost every superannuation fund worked out the same thing we did and sold equities at the end of January, the market would have fallen in January. They didn’t.

The answer is superannuation funds have unlisted assets that they are not writing down. They are pretending that the prices are mostly unchanged from January.

What about the recently announced writedowns?

A few industry funds have written down assets. For example, AustralianSuper has revalued its unlisted infrastructure and property holdings downwards by 7.5%.

Um, have they looked at the rest of the market? The listed property sector is off more than 40%. Airports? Down 30%+.  Private Equity? Ha! You are telling me that illiquid shares are worth a few per cent less while listed shares are down 25%+ and illiquid bonds aren’t even trading?

The writedowns help, but are nowhere near the level the assets would sell for today. 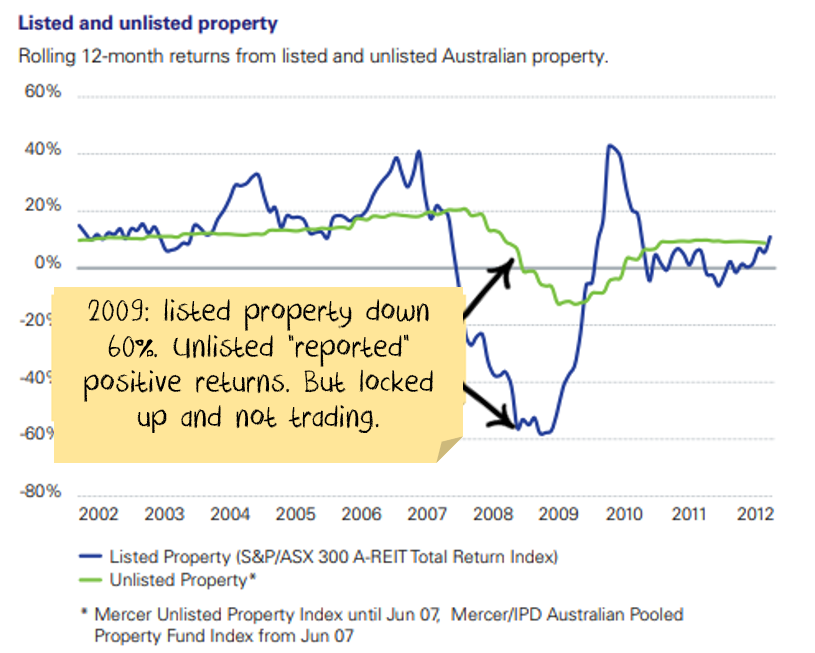 The problem is that if you own a fund that reports like this, you can be diluted if other investors leave. And any contributions you make now are at inflated prices. To illustrate with an extreme example, let’s say:

The other problem with a typical superannuation fund (but not some of the newer ones that use a separately managed account structure) is your tax is mixed with other investors. Rodney Lay from IIR recently highlighted the issue:

…unit trust investors face another risk – being subject to the taxation implications of the trading activities of other investors. Net redemption requests may require the manager to sell underlying portfolio holdings which, in turn, may crystallise a capital gain… …During the GFC some investors had both (substantial) negative returns plus a tax bill on the fund’s crystallised gains. Good times!!!

So, if you are a loyal soldier sticking with a superannuation fund that continues valuing unlisted assets at last year’s prices then:

But at least your superannuation fund will be able to “report” higher returns.