March was a month for value stocks to shine. Global markets boomed, up 5% and Australian markets rose 2.4%.  We had positioned our portfolios for a rise in bond yields and a rotation to value stocks and so our portfolios outperformed benchmarks. Our asset allocation portfolios all rose as well, our growth portfolio the best, rising 3.7%. 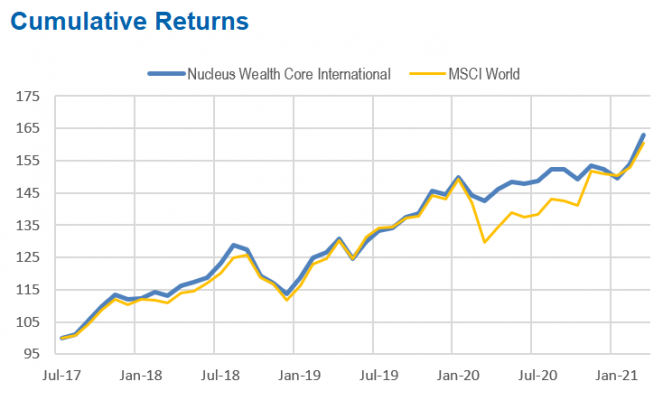 Is any news good news?

The stock market tends to be driven by narrative. For much of last year, the narrative was that bad news was good news. Bad economic news meant bond yields fell and inflation expectations cratered. However, it also meant more central bank intervention. Growth stocks boomed. In a time of no growth, any stock that did exhibit six months of growth would “therefore” grow forever. Even better if the stock didn’t make any profit! A lower bond yield meant investors could pay more for those stocks. In the land of the blind, the one-eyed man became king.

There is one more narrative circulating through financial markets you should be aware of. We are calling this one good news is bad news. It is basically the reverse of the first narrative. It assumes that the rising bond yields and inflation will burst the stock market bubble.

Which narrative will reign supreme this year?

The least likely, in my view, is the “good news is bad news” option. Not only do I think that the inflationary pressures will be temporary, but I also believe in the central bank “put”. i.e. central banks do not want bond yields to rise to the point where they damage economic growth. The Australian and European central banks have expressly commented on this. The US Fed has avoided explicitly commenting, and so maybe markets will test their resolve. This could lead to short term pull-backs, but these are more likely to be buying opportunities.

Our position is that profits growth will put a sizeable dent in the overvaluation as inflation spikes. But that will fall back, driving violent rotations under the equity hood but no major breakdown in the engine itself.

So, the focus right now is on the “good news is good news” argument. Deflation and disinflation are likely to take over in the coming months, but that is a theme for later.

There are other risks.

Investment markets are distorted by central bank buying and government stimulus. The number one risk for the next few years is a policy mistake. But nothing seems imminent on this front.

There are ongoing virus mutations and problems with some vaccines. At the moment, these issues look solvable.

Given elevated debt levels, a debt crisis is possible. It is unlikely to be in corporate debt markets where central banks have already expressed a willingness to wade in to bring borrowing costs down.

Hedge funds are a more likely culprit. We’ve seen Melvin Capital and others lose vast amounts on a short squeeze in the past three months. Then Archegos blew up, over overleveraged on long positions that moved the wrong way. With so much debt, expensive markets and such low interest rates, there is an ever-present danger. The next one may be large enough to threaten financial stability. On the other hand, moral hazard is in short supply. If the blow-up is big enough, central banks and governments would probably step in.

Governments globally have been willing to suspend rules around bankruptcy and generally allow consumers to not pay loans. As these rules are progressively lifted, there may be problems. But globally, rising house and stock market prices have alleviated the most obvious issues.

The common thread is that moral hazard is no longer an issue. Need to suspend the rules of capitalism and prevent bankruptcies? Go for it. Do you want central banks to print money to reduce the cost of corporate debt? Not a problem. How about central banks lending money to commercial banks to keep them profitable? Just hide your program in plain sight behind an acronym like TLTRO or TFF, and no one will bother to ask questions. So much money has been spent or printed that few are bothered to be outraged anymore.

The one place where I’m pretty sure there would be backlash would be an emerging markets debt crisis. US growth is looking like it could be much stronger than the rest of the world. This could lead to a significant rise in the US dollar. That could create conditions similar to the Asian crisis in the late 1990s. This isn’t a base case, but it is one of the only debt areas that central banks and governments would face resistance to rule changing/money printing solutions.

The categorisation of the narrative options into good/bad is clever semantics. And my favoured narrative, good news is good news, is the only non-contradictory semantic.

However, the categorisation probably over-trivialises the other narratives.

They are genuine possibilities. I am closely watching for signs that growth is tapering and deflationary forces are again reigning supreme. While the result in that narrative is still “good news” for stocks, the affected stocks are very different.

This is not a “set and forget” market for asset allocators.

The market surged over March after recovering from the end of February inflation scare. Both our Core portfolios outperformed their respective indices, as our mix of value stocks coupled with travel stocks provided good gains. At the start of the month, we reweighted to more value, but by the end of the month we were taking profits on some of the holdings that had run the hardest.

In particular, we have been buying more US dollar exposed stocks. Not necessarily listed in the US though, one of our largest sector bets has been the construction materials sector.  We have been buying stocks listed in Europe, because they are much cheaper, but with extensive exposure to the US market. 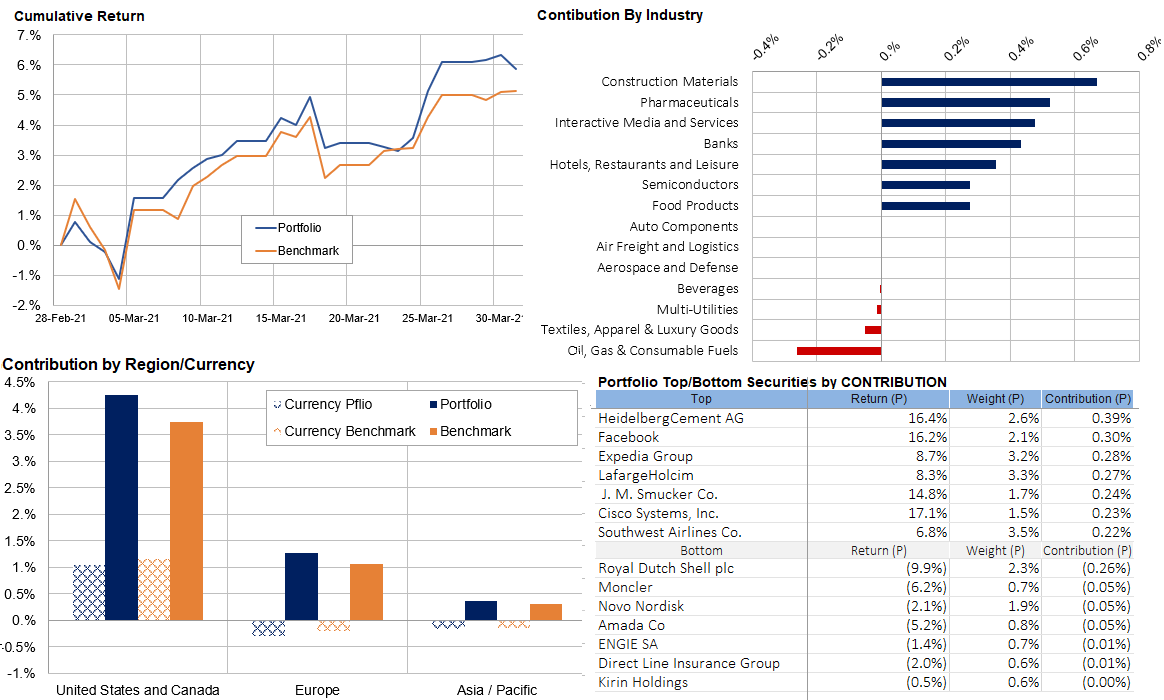 During the month, we swapped Auto Trader (UK) for O’Reilly Automotive (US)  and took on some oil exposure.

The Core Australian portfolio outperformed the index this month and is now outperforming its benchmark year-to-date. A strong showing from the Value stocks and travel mirrored the International trend.

Early in the month we exited our last Dominoes Pizza but increased USD earners like Computershare, Brambles and Aristocrat.

A bond armageddon arrives
Australian housing market valuation May 2022 detail
To Invest Inside Super or Outside Super? That is the Question?
Subscribe