The Australian housing market is crazy. Plenty of pundits are calling for the bottom of the current housing downturn now that a “house price friendly” federal government has been elected but there is little recognition of how messed up the current cycle is and why that makes any sort of forecasting extremely unreliable.

A typical housing boom/bust cycle usually has the following elements, roughly in order:

First, a quick redefinition. I’m going to focus on Sydney/Melbourne where most of the price rises and building have occurred because other parts of Australia are different – especially Perth.

The loosening of lending standards comes in many different forms, in the US it was the rise of the shadow banking sector, in Ireland it was partly low interest rates in Europe being inappropriate for the Celtic tiger and partly weak regulation – the source of credit rarely the same housing cycle to housing cycle but the effect is the same: lenders want to lend as much as possible to people who can’t afford it. For the first ones in the game, the additional lending works well while property prices are rising, but you don’t want to be the last one in.

For Sydney/Melbourne it was a mix of the Household Expenditure Method (often called HEM) which let the banks assess borrowers as if they had the expenses of someone on the poverty level and a big increase in interest only investor loans that led to the Australian version of a credit boom.

Additionally, Australia then added to the demand through:

So, Sydney/Melbourne super-charged step 1 of the process.

Also, Sydney/Melbourne had a few wrinkles to step 2 of the process – the construction boom. Australia is the least populated continent (ex Antarctica) on the planet. However, it is also highly urbanized and has some of the most restrictive land use laws which means supply is less adaptable – it takes longer to build and is more expensive. The Sydney/Melbourne construction boom also focused on the delivery of apartments rather than houses, which also increases the time taken for supply to come on as both the planning and construction phase for apartments is far longer. The effect was still a record number of houses and apartments built, which is a typical outcome for a housing boom, but the supply lag was greater.

In the interim, a Federal government has been elected that ran on a platform of not letting house prices fall, helping first home buyers borrow as much as possible (by adding a government guarantee to let then borrow up to 95%), reducing lending standards (APRA cut the loan serviceability requirements) and quite probably more to come. It is my expectation that the Coalition will consider trashing the budget a few billion to keep the housing market from falling part of their “mandate”.

Demographia estimates Sydney and Melbourne to be top 5 for unaffordability across major developed markets.

You can fix affordability three ways:

The first looks unlikely – we believe a mix of secular stagnation, inequality, falling union membership, increased automation and high levels of immigration mean that wages are going to remain weak unless something changes unexpectedly.

The Reserve Bank will work on the second but has very limited scope as interest rates are already at record lows.

The government is trying desperately to stop the third – but if there is to be any return to affordability, prices are most likely of the three factors to change significantly.

Where to from here?

A range of factors affect supply and demand – here is my estimate of what the key factors were and how they are looking to change (for more on each of the factors, see this recent podcast): 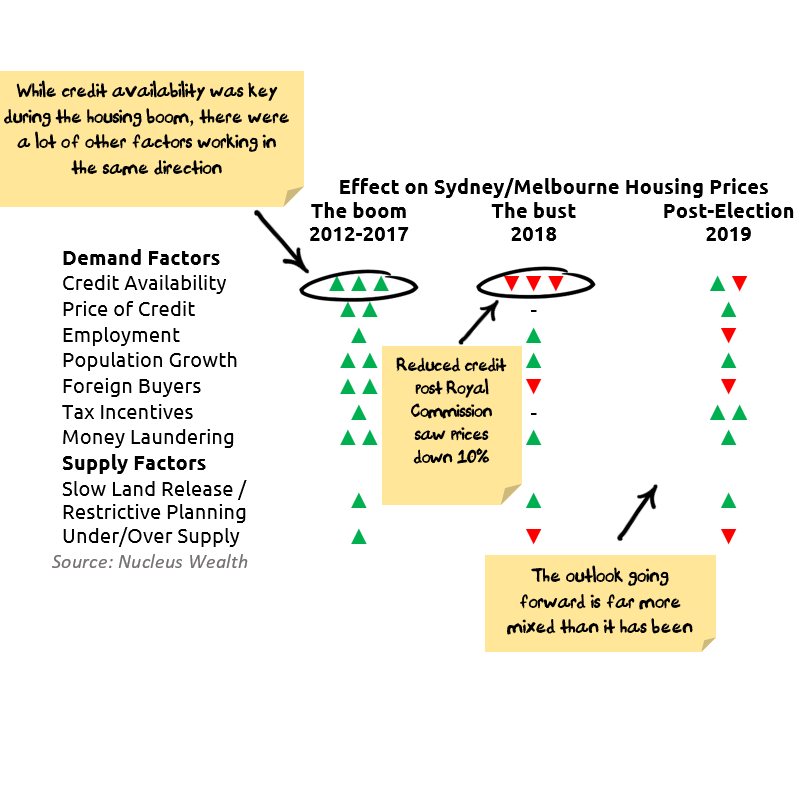 A few important factors to note:

Both of these factors remain uncertain.

The handbrake on lending from the Royal Commission is still in place, but politicians and regulators are busy trying to get credit flowing again. Quite incredibly, less than 3 months after the Royal Commission harangued APRA for being too trusting, not enforcing lending standards and being too close to the banks, APRA loosened lending standards to allow banks to set their own rules on mortgage serviceability. So, you have to expect there is more to come on the regulation and policy front to try to keep the credit party going for a little longer.

Having said that, property booms quite often have politicians trying to find new ways to shovel debt out to the masses at the peak, and only rarely does that prevent a bust.

The question is momentum. Either

It is hard to find a middle ground, the outcome looks relatively binary and very much a study in behavioural finance. Can ScoMo convince enough first home buyers to take on 95% debt burdens to save the rest of the housing market? Can the banks and developers convince investors to borrow far more than they will make in rental income in the hope that capital gains will give them a good investment?

Employment remains the wildcard. With stagnant wage growth and dramatic drops in housing construction approvals, my money is on a significant rise in unemployment.

In Perth that was enough to see five years of falling house prices. I’m not sure why so many economists are convinced that east coast house prices won’t be similarly affected.

Keep in mind that all of the above is predicated on benign world growth. If the trade war spirals out of control, or there is a debt crisis in any one of a number of over-indebted countries then the negative scenarios for Australian housing become the base case.

The net effect is that the Sydney/Melbourne housing cycle is messed up.

While I can understand the arguments of those who say that house prices have bottomed, given the complexities above I am skeptical of the level of conviction displayed.

The base case might be a grind sideways/higher in prices, but there is far greater risk that house prices fall sharply than rise sharply.