Labour has proposed a number of changes to franking credits paid on dividends. The proposal absolutely has some merit behind it, as a system set up so that people weren’t taxed twice has evolved into a system where some people get taxed zero times.  But the current implementation has significant issues and creates a lot of enemies.

It has the commentariat confused because there are two separate issues dragging it in different directions:

The intersection of these two groups, poor retirees will lose twice. That doesn’t look like good policy or good politics.

The table below shows the total tax rate (i.e. company tax plus personal tax) paid by various investors over time (a full calculations at the bottom of this post): 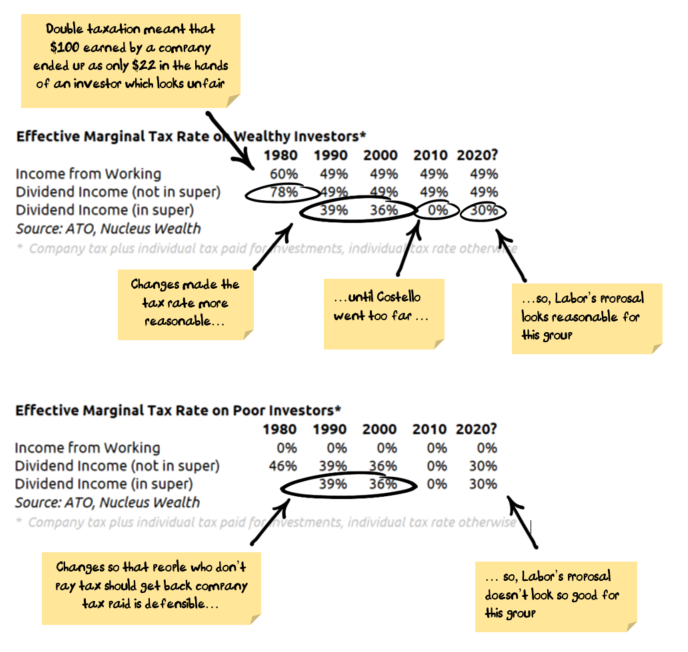 Full disclosure: I run an investment fund. We invest in a mix of assets including Australian shares which are negatively affected by the proposed changes. However, we also have a large amount invested in international shares where we will probably benefit. So, I’m not entirely sure which way I’m conflicted! When you are reading commentary, it is worth noting whether you are hearing from a winner or a loser from the change:

Despite negative effects on my own business, getting wealthy retirees to pay a tax rate above zero is unambiguously good policy. It doesn’t have to go back to the 78% that was paid in the 1980’s, but zero is too low.

Getting poor investors to pay more tax is probably not good policy.

Footnotes – calculation for a retiree on the top tax rate: