Share valuations have not been this expensive since the tech wreck. Earnings growth is pretty close to zero. A supply shock is accruing in China. So is a demand shock. There are significant tail risks in corporate debt markets. And I haven’t even got to the threat of a global pandemic.

In February the storm struck. Thankfully our portfolios were positioned for the event. Our tactical income and accumulation finished up 0.7%. While our growth portfolio finished slightly lower in the calendar month, it has increased since the start of February while stock markets have fallen 7%+:

Our direct share portfolios (which are always invested) did fall, but both substantially outperformed their benchmarks.

It is unclear which day the quote was from. As at the close on the 19th, the ASX 200 Accumulation index was down 32% from the start of February. Our growth fund is down 0.79%:

Many superannuation funds also hold significant levels of unlisted assets which they value themselves, most likely inflating returns.

Acknowledging the heightened concern around investments at this point in time, we put this report out early.

At this stage, we don’t have the figures from other superannuation funds to compare to. We will publish an update later in the month when they are released. Given the falls in stock markets, we believe we will substantially outperform. However, I note most superannuation funds have significant unlisted assets, and I expect they will use these to “smooth” their performance.

The risk is a wave of company defaults from companies that are overleveraged and reliant on either demand or supply from China.

However, if (a) loans are being offered too cheaply and (b) there are enough defaults (or one or two significant, high profile defaults), then:

China has already locked in months of weak consumer demand, quarantines and shutdowns.

Credit markets are closed. This risk of the above scenario is increasing.

This risk is a clear and present danger to markets – regardless of the further spread of COVID-19.

Viruses are the ultimate non-linear risk. The word pandemic literally describes an exponential outbreak of a virus across multiple countries.

The initial stages of an outbreak are basically the only time you have to stop the virus. Once a virus reaches a critical mass of people, it is virtually impossible to stop until it has run its course.

The key at that point is slowing down the virus. The real danger is when hospitals are over-run, and health professionals succumb. With limited staff, beds or respirators, death rates skyrocket.

The relative response of two US cities in the 1918 flu pandemic is instructive:

These come from our webpage that tracks statistics and updates daily. See here for more detail on any of these questions.

Which data can be trusted? We are looking at South Korea, the Diamond Princess and Singapore as being the best indicators. They are the largest affected countries and the most transparent. China, Iran and Italy all have significant question marks over data.

Is winter an issue? The longer it goes without a significant coronavirus outbreak in a tropical country, the more we need to suspect a heat/light/humidity factor. This will have a substantial effect on how adverse the economic impact is.

How fast is it spreading? The case numbers are still catching up from earlier undiagnosed cases which might make the spread seem faster than it really is. Clearly, there are outbreaks in South Korea, Italy and Iran. Japan is questionable. Outbreaks appear likely in the US, Germany, France and Spain.

How deadly is it? If contained, our best estimate is in the 0.4% to 1.0% range if the outbreak. It is probably closer to 5% if not contained as in Wuhan and (likely) Iran. It is significantly more deadly for older people.

How long will it last? At a local level, prior epidemics suggest six weeks in an unconstrained environment (Iran?). In areas with quarantines and shutdowns much longer. At least 3-4 months, more likely double or triple that.

Once the virus reaches numbers into the hundreds in a region, then quarantines, bans on public gathering and shutdowns are the only hope to slow the progress and save lives.

There is a significant (and necessary) economic cost to these measures.

This step China has already reached. And not just in the Hubei province, right across China bans and quarantines are restricting the economy. 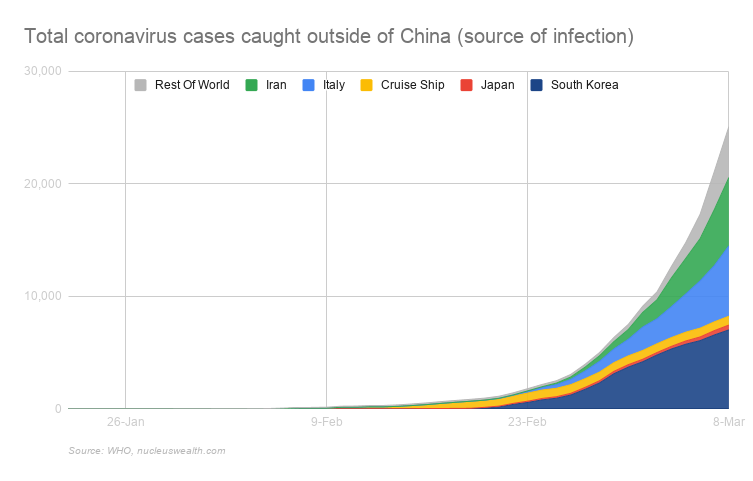 South Korea, Italy and Iran have all reached this point. France, Germany, Spain and the US are not far off.

Our base case continues to be that most Northern Hemisphere developing countries will end up in the same position.

I’m not sure about tropical countries. It may be that some combination of warm weather, humidity and/or sunshine is enough to slow the virus: 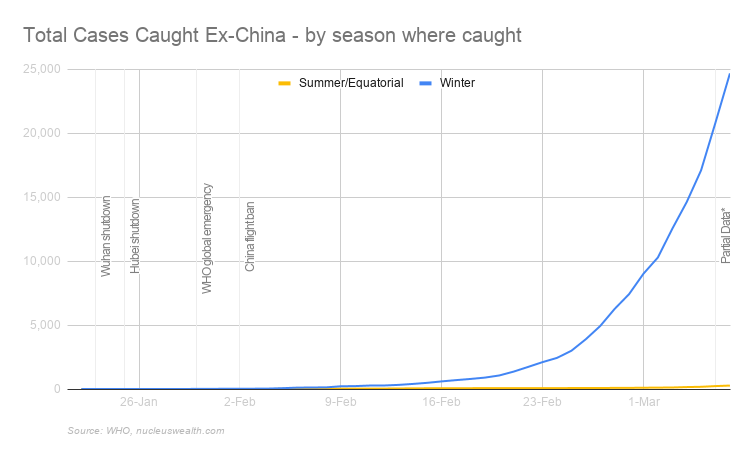 Our base case is equatorial countries avoid significant outbreaks. But, our faith in that forecast is low. We are carefully monitoring this data.

Even if contained, there is a relatively high likelihood that in three months, when the southern hemisphere winter starts, other developing countries will see outbreaks.

Initially, the market was happy to “look across the valley” of any downturn from the virus. On the other side of the valley, it expects a massive Chinese stimulus package and bid ups shares on the expectation.

The risk is that China can’t stimulate much harder – they were already building at incredible levels:

And so it is likely the stimulus won’t be enough to replace the lost demand. After being through a complete quarantine/lockdown, my expectation is consumer spending will be muted for months and maybe even years.

Sectors and countries I’m looking to avoid have some key elements:

Australia ticks almost every box above. Europe ticks a lot. Canada has a decent spread.

Our portfolios “went to ground” before the crisis hit, selling stocks and investing in bonds/cash/international currencies. All of our funds are at minimum weight to shares. This is a significant deviation and one that we have not undertaken lightly. So far it has been the right move.

How far can markets fall?

This is the million-dollar question.

The decision last month was relatively easy: markets at highs not seen since the tech-wreck, no earning growth, a looming supply and demand shocks, and a possible pandemic. Sell. There was no need to put an exact figure on how far markets would fall as they were clearly too expensive.

The decision this month is still easy in my view. All of the above factors have gotten worse, markets only fell a little over 10%. If you made the heroically bullish assumption that earnings will only fall 10%, then share markets can fall another 20% and still be slightly expensive. So there is no reason to buy yet.

At the moment I see no great reason for hope in any of the above.