Only when the tide goes out do you discover who has been swimming naked.

It is a market truism that a rising stock market can hide a lot of sins, and it is only when markets fall or become volatile that you can see who has been simply taking lots of risk in a bull market.

So, with markets down 10%+ over the past few months, now is the perfect time for you to have a closer look at your investment manager’s returns and work out whether they are swimming naked. There are four different aspects you should be looking at:

Are the assets what you thought they were?

We recently had an investor come to us who had thought that his money was safely invested in an Equity Income Fund with only 12% exposure to Australian shares. After suffering falls of 10%+ over the past 3 months he had a closer look only to realise that he had closer to 50% exposure with once he added in listed property which had been classified as not being Australian Shares.

This is a common occurrence, and I suspect a lot of this is the fault of IRESS. IRESS is an investment platform used by most Australian professional investors and they have a particular way of classifying assets: 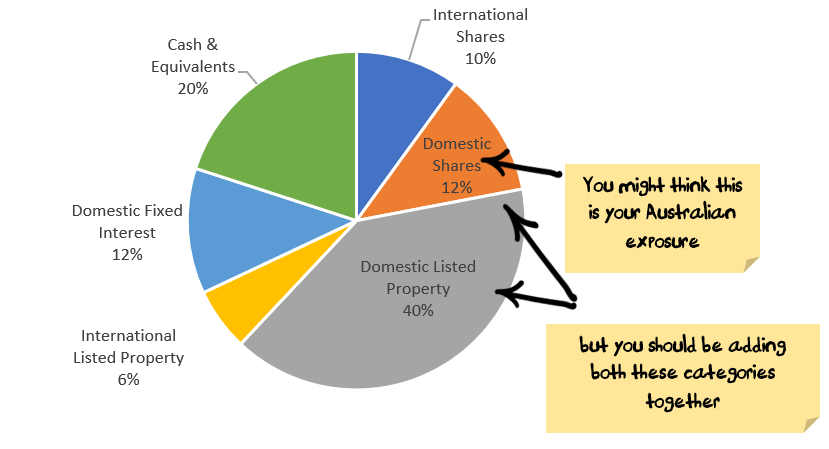 Many investors look at the above and think that their share market exposure is only 22% (10% international + 12% domestic) and so they have a conservative portfolio. In reality, almost 70% of the above portfolio is invested in shares – and given often higher risk hybrids can be classified as Domestic Fixed Interest, the exposure might even be higher.

The reality is that an Equity Income Fund is very different to a Bond Income Fund: 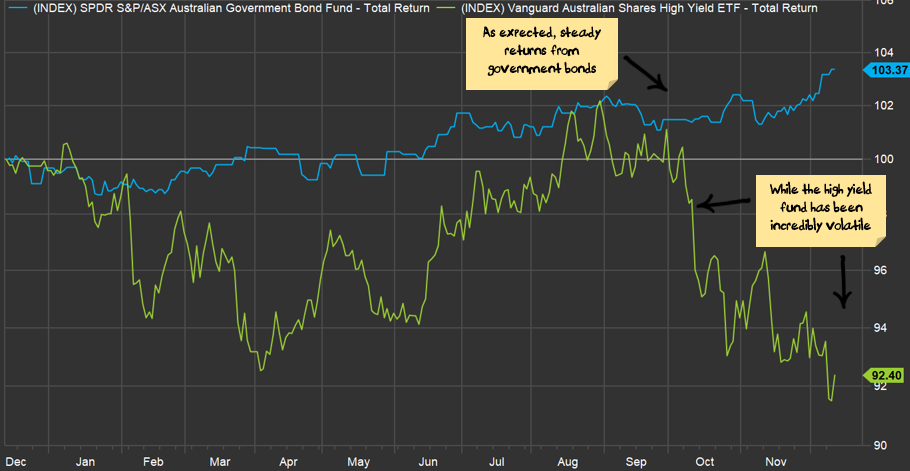 “Reaching for yield” is an expression in financial markets used to describe investors who chase higher-risk assets to get a higher yield in boom times, only to lose significant capital when markets turn negative.

So, the first thing to consider is whether you have bought a fund you thought had a different risk profile to what it actually has.

Are the funds invested how they should be?

If you lost 60% of your money investing in an Emerging Markets 3x Leveraged ETF this year, it is hard to blame the product if it is simply investing in emerging markets with 3x leverage. You can fault the decision to buy the fund, not the fund itself.

But, if you bought what you thought was a low-risk/value/absolute return fund and they have been chasing growth stocks then you might have a fund manager who has been swimming naked.

The way this works out is that fund managers are human. At the tail end of a 10-year bull market, while all of the growth funds have been partying hard and reporting great results for 10-years, the low-risk/value/absolute return managers are the designated drivers sipping on mineral water in the corner and underperforming the market. The danger is that your low-risk/value manager got sick of underperforming and started quietly partying with some growth stocks – now that you need the stability of a low risk/value fund you find that they are not the safe assets you thought.

Hedge funds and absolute return funds often have opaque “I could tell you how I get my returns but then I would lose my secret sauce” investment methodologies that require a large dollop of trust. If they were underperforming a rising market, but then had reasonably negative investment returns over the past few months you have to question whether the excuses are real.

If you are invested in a low-risk/value/absolute return fund that is down more than a 5 percent over the last few months, you need to have a closer look at what they are doing. If your low risk/value manager fell by as much or more than the market, you should be having a closer look at whether you have a fund manager swimming naked.

Are your funds tactically invested?

There are funds that are strategically invested – i.e. they have relatively fixed weights and so they are always (say) 80% equities and 20% cash/bonds. Or you have invested in an international fund which is always 95%+ invested in international stocks. Similar to the levered emerging market ETF above, you can’t fault these funds for buying what they said they would. You can fault the decision to invest in these funds, but not the fund.

The funds that are tactically invested need deeper analysis. There are (broadly) two types of these funds:

Magellan Global Trust (ASX:MGG) is an example of one of these. These are funds that are notionally one asset (international shares for Magellan) but with a tactical overlay – Magellan can hold up to 50% cash.  They are hard to judge as these funds don’t give you a diversified investment portfolio but they should have an element of safety. Ideally, these funds should have been accumulating cash as the market rose but these funds are hard to measure as they are stuck halfway between giving you exposure to a single asset and being an absolute return fund.

I don’t know to expect from these funds – some of them are sold as being fully invested on the way up but have lots of cash when the market falls. I’m guessing most investors will be upset if they missed out on the upside and disappointed if they miss out on the downside as well. It is hard to know what the benchmark should be for these funds and so you will have to make up your own mind as to whether they are doing a good job.

These are your typical superannuation or diversified funds. Ideally, they should have a mix of growth assets and defensive assets. The fund managers who have been swimming naked in these funds will be the ones who were carrying full weights in growth assets – trying to chase the bull market higher and then got caught out when the market fell. Again it comes back to the mandate – if you have invested in a fund that can be 60-90% in growth assets and they were carrying 90% growth assets when the market turned down then you want to have a closer look at the manager’s reasoning and whether you want to stick with them.

The lower risk diversified funds should have fallen by less than half of what the share markets have fallen.

Are your funds returns too stable?

Did your fund not fall at all, or rise slightly? While this might not sound like a problem, it can be. There are three potential problems:

If your fund returns have been remarkably stable, have a closer look

It hurts when the fund you invested in falls in price, and most funds have fallen in recent months. But that happens in investing.