Bloomberg ran a report last week on electric cars that turned into a longer read than I expected as I chased through some of their numbers that seemed wrong:

It’s been 10 years since Apple Inc. unleashed a surge of innovation that upended the mobile phone industry. Electric cars, with a little help from ride-hailing and self-driving technology, could be about to pull the same trick on Big Oil. 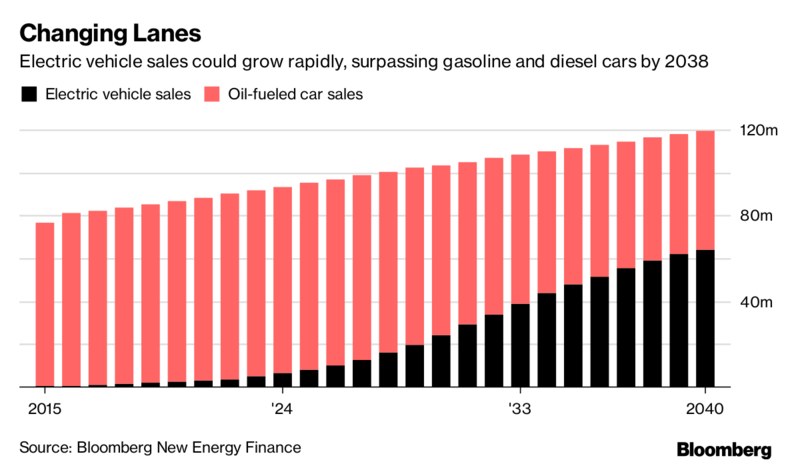 I think this chart is dead wrong. I don’t know when EV sales will take off, but when they do they won’t take 20 years to hit 50% penetration, they will be lucky to take 5 years – once new technology takes off, it takes off quickly (click for full chart): 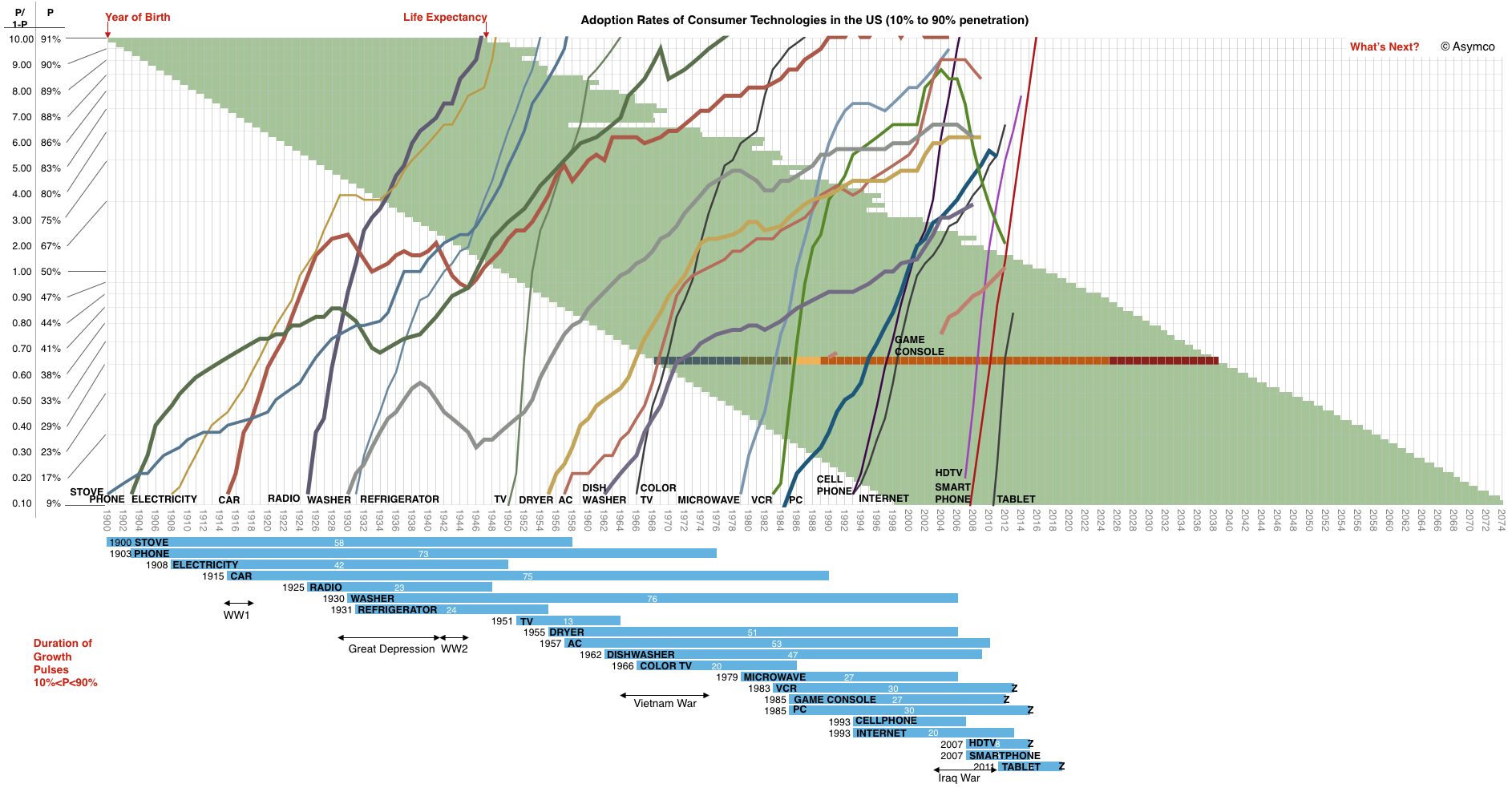 The question to me is whether the curve hits the steep part in 2020 or 2030, that is what is going to be the key determinant about whether to invest in cars and whether to go short oil.

With a number of countries already mandating all new cars to be electric from a point 15-30 years from now, regulation will be helping to accelerate electric vehicle take up.

Then the Bloomberg article looked at the cost of driving:

The total cost of ownership of electric and oil-fueled vehicles will reach parity in 2020 for shared-mobility fleets, five years earlier than for individually-owned vehicles, according to Bloomberg New Energy Finance.

The 2020 estimate matches my numbers from earlier this year (see this post)– I was comparing how much you save in petrol to the cost of the battery and came to a similar conclusion – although by my numbers individually owned cars will take longer to reach parity:

However, the next chart had me stumped: 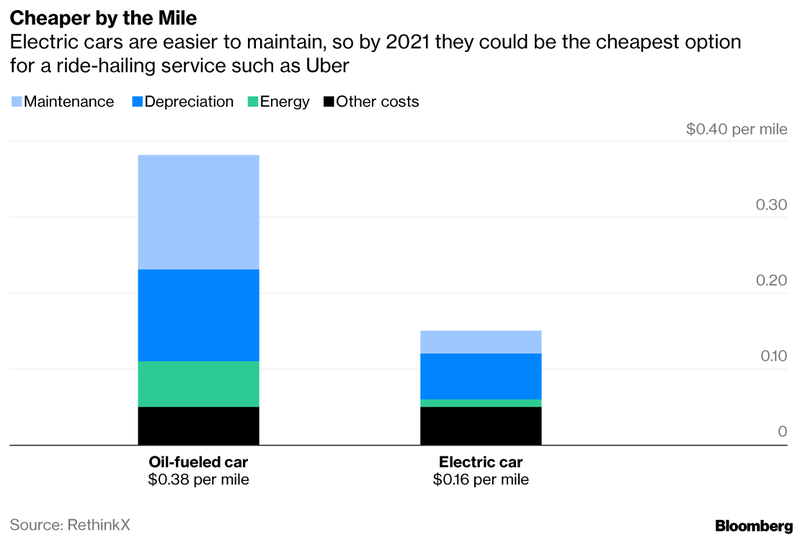 Are maintenance costs really the largest cost in owning a car? And why do they have depreciation lower for an oil-fueled car when the electric car has an extra $10k of battery to depreciate?

So I went and got the RethinkX report – which has a number of good data points, but clearly has the rose coloured glasses firmly in place. The reason the above chart looks so good is that it has some heroic assumptions: basically RethinkX assume that electric vehicles last for 800,000km vs 320,000km for petrol powered, maintenance costs are 80% lower, and insurance 90% lower.

Maybe RethinkX will be right, but I’m not expecting many companies to factor such massive gains into their business plans. I’m still thinking the mid 2020’s is more likely.

I hadn’t seen the Tesloop case study before:

Tesloop is a California-based company offering a low-cost alternative to both short-haul aviation and long-distance drives. It currently operates a number of routes around Southern California (e.g., LA to Palm Springs, Las Vegas, etc.), offering door-to-door and pickup-point-based ride sharing service using Tesla cars. Tesloop is utilizing these cars for more than 17,000 miles per month — a level unprecedented for passenger vehicles — and that is expected to rise to 25,000, running or charging them almost 20 hours per day.

Tesloop’s two other vehicles have reached 100,000 miles with degradation of only 7-9%. This is with a very aggressive charge cycle, which CEO Rahul Sonnad describes as “maybe the worst possible behavior patterns given the current battery chemistry optimizations.”

Sonnad expects that these vehicles could easily stay in service for 5 years at 25,000 miles per month — equating to 1.5 million highway miles.

The drivetrain and battery are expected to outlast other elements in the vehicle, which may need refurbishment. The current ranges of Model S and Model X vehicles would allow a company such as Tesloop to provide point-to-point (Pre-TaaS) service between Boston and New York City, Austin and Dallas/Fort Worth, or Nashville and Memphis.

As incentives for the manufacturers change toward long-life design, these costs are expected to be minimized, and there is a clear trajectory of lower maintenance in newer vehicles of the same model.

Cost-per-mile. Including maintenance, fuel, insurance, depreciation and finance costs, but excluding driver cost, Tesloop’s current cost per vehicle mile is 20 to 25 cents per mile in a Tesla Model S.

I thought this was interesting – and gives some weight to the optimistic assessment of miles travelled and costs above. On the flip side, we are talking about 3 cars. And the one that had driven the most had a battery replacement at 200,000 miles. So, hardly statistically significant.

Here are my numbers on driverless taxis:

Given the conclusions from earlier in the year about electric car take up, and given that car manufacturers and suppliers are dirt cheap, we have a number of these stocks in our portfolios.

Performance to date has been good – GM, Peugeot, Magna International, Delphi and Linamar are all up 10%+ in the last 2 months.

We are looking closely at the sector and whether we lighten the exposure.

Hidden gem in the RethinkX footnotes:

There are many potential new business opportunities that might be unleashed by low cost transport. We use “Starbucks on wheels” as an example. If cost per passenger mile drops to 2-3c by 2030, the economics of running a ‘Starbucks on wheels’ on popular routes might become hugely favorable compared to the cost of the real estate investment needed in city-center stores. If a 20-seater vehicle costing 2 cents per passenger mile covered 100,000 miles per year, the cost of the vehicle would be $40,000 per year, substantially less than the equivalent rent on a store. A Starbucks van could operate on popular routes, subsidizing travel costs through the sale of food and beverage. As autonomous technology begins processing costumer data sources, such as social media, marketing and e-commerce could also become potential venues for revenue generation.

Given Australians seem to have roundly rejected Starbucks as selling coffee flavoured hot milk, we will have to bring on the Macca’s bus… free trip to work with every McValue meal!

Damien Klassen is Head of Investments at Nucleus Wealth.
The information on this blog contains general information and does not take into account your personal objectives, financial situation or needs. Past performance is not an indication of future performance. Damien Klassen is an authorised representative of Nucleus Wealth Management, a Corporate Authorised Representative of Integrity Private Wealth Pty Ltd, AFSL 436298.