Stock markets around the world bounced hard off their Christmas lows to give some respectability to what would have otherwise been another poor month for shares. Being overweight bonds came to the rescue in our tactical portfolios, in particular, our Income and Accumulation funds benefitted finishing up around 1% for the month. The Australian dollar also acted as a shock absorber over the month, falling by 3.6% vs the US dollar which cushioned losses on international holdings.

Over the calendar year, our favoured assets were the best performing – Australian bonds topped the major asset classes, followed by international shares and cash: 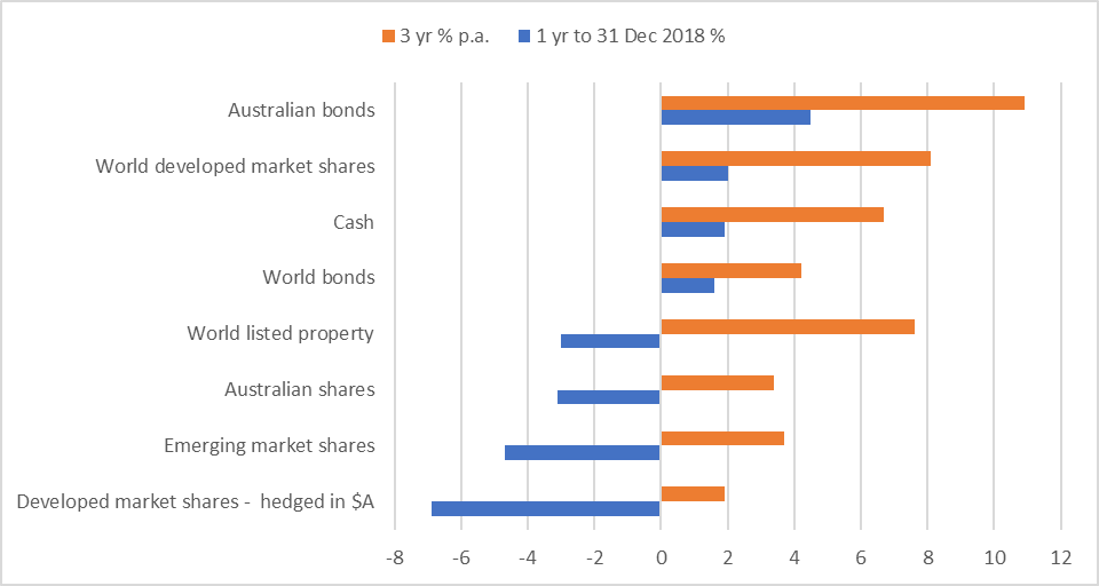 That preference led to our tactical funds significantly outperforming the median superannuation fund – our Income and Accumulation funds performed 2.7% better than the median, Foundation was 1.7% better and Growth was 1.6% better:

Having said that, it was clearly not a uniform performance over the year – international shares boomed for most of the first 9 months and then busted for the last 3 months.  We wound back our exposure to international shares as the year progressed (although not as much as hindsight would have preferred), and so continue to sit on a substantial cash and bond balance. While we added a little to our share exposure when markets fell at the end of 2018, we have been taking profits as share markets have recovered.

For most of 2018, we grappled with the dilemma of how to get enough exposure to the final leg of the bull market while maintaining downside protection in case markets unravelled earlier than expected. We are not expecting much positive news for stocks and so 2019 will be about how to get downside protection.

A resolution to the US/China trade war is one possible positive catalyst, however, we believe the intrinsic issues between China and the US run so deep that any announcement in the next few months is likely to be made to appease the egos of the leaders rather than as a long term solution. If this were to occur, our instinct would be to take further profits on shares and increase our bond/cash holdings further.

For the most part, we expect 2019 to be about avoiding accidents. Brexit, the rise of extremist parties in Europe, slowing growth plus too much debt in China, trade wars, emerging market crises and a slow-motion Australian housing crash will all present their challenges. If every accident is avoided then the stock market could eke out reasonable returns – but our base case is that the best returns are likely early in 2019 before slowing global growth (particularly in China) becomes apparent.

Often the worst performing asset class of one year is one of the best in the next year. We are not expecting this to be the case for Australian shares. 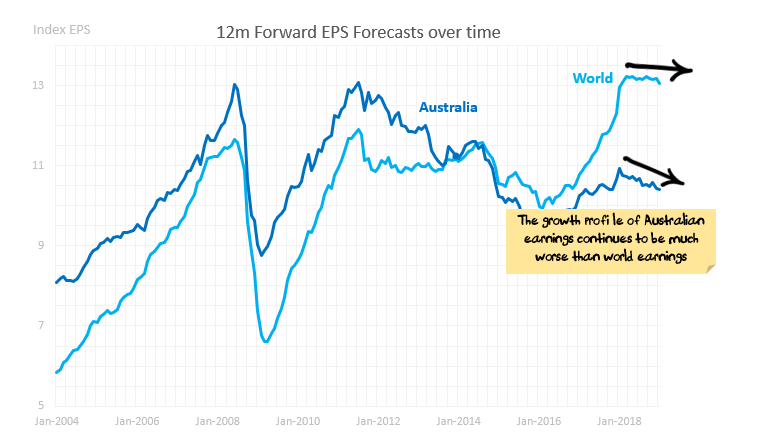 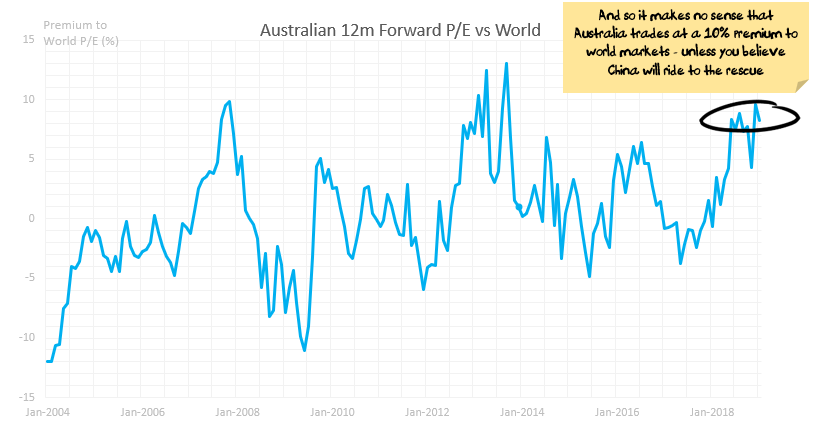 The Australian market seems to us to be a one-way bet on China launching another major stimulus package, which will in turn boost demand for Australian iron ore and coal. This is possible, and maybe even likely if conditions get worse in China. However, there are a number of differences this time:

With those points in mind, and Australian stocks seemingly already pricing in a China bailout, we are opting to invest elsewhere. All of our portfolios are at, or close to minimum weights for Australian stocks.

Question 1: Can a weak stock market prompt Trump to make a trade deal with China?

Yes is the short answer. However, it is unlikely to be an all-encompassing fix to the issues between China and other countries. Cancelling a few tariffs will not solve China’s trade issues and trade is not the only consideration in the growth issues facing China.

Question 2: Does weaker Chinese growth mean a bigger Chinese government spending package is coming, and a weaker global growth outlook mean that it is coming sooner?

Markets are certainly pricing it this way. The iron ore stocks, in particular, have reacted to poor Chinese growth numbers by outperforming rather than underperforming – seemingly pricing in the expectation that China will need major stimulus yet again.

Question 3: Does a weak stock market suggest another “Shanghai accord” is likely?

In 2015 China went through a similar period of weak growth, stock markets declined and the oil price plunged. The situation ended with the US Fed pausing its upgrades and the US dollar stopped rising. The rumour is that a secret deal was made between central banks at a meeting in Shanghai to limit the USD which would give room for China to stimulate its economy.

Given the trade tensions and a US economy growing quickly, this did not look likely 3 months ago. Fast forward to today and a deal is now more possible.

The broad sweep of our asset allocation over the last 18 months was to ride the Trump Boom, winding back on equities as share markets advanced and topping up when they fell but maintaining an underweight position in shares.  Now, it is about an appropriate level of protection as the current business cycle draws to a close.

December saw almost 75% of our international shares in retreat. Notable detractors were J&J with an asbestos in talc scare and Apple on reports its revenue was to slow.  Performers in December were the more defensive food & drug sectors as well as the energy plays.

On a calendar 2018 basis, it was the Chip manufacturers that had a huge share price correction in the expectation of falling demand. On a full year basis this thematic also proved true with the exception of Microsoft that bucked the trend of underperforming Technology stocks.

Our portfolios to date have been out-performing and taking less risk. The disclaimer is that they have only been running for 18 months, and that is not enough time to make definitive judgements.

When looking at the tactical funds, one of our key measurement criteria is volatility. All of our funds are significantly less volatile than the Australian share market – our income fund is around 80% less volatile, and our foundation fund is about 60% less volatile:

In summary, our view continues to be that Australian investors should continue to hold minimum weights for Australian shares at this point in the cycle. Our intention is that our portfolio is positioned to take advantage of our key themes but minimise risk in the event that our themes take longer than expected to resolve themselves.

We retain large cash and bond balances to hedge against volatility and in the expectation that capital protection will be important during 2019. If markets continue to be rally then we will likely sell more shares.  Our key focus is Chinese growth, gauging the extent of the slow down and the policy response.