The rip higher in bond prices meant that our asset allocation portfolios outperformed the median super fund substantially in May – three of our four tactical funds beat the median fund by over 1%:

The bond movement though leaves us at an impasse. Bond markets are pricing disaster, equity markets are pricing an extended boom. Bond yields, in particular, are crazy. I’m going to use Germany as a more extreme example, but the story is similar pretty much all over the developed world.

It is desperate a cry for help from markets, whether they know it or not. 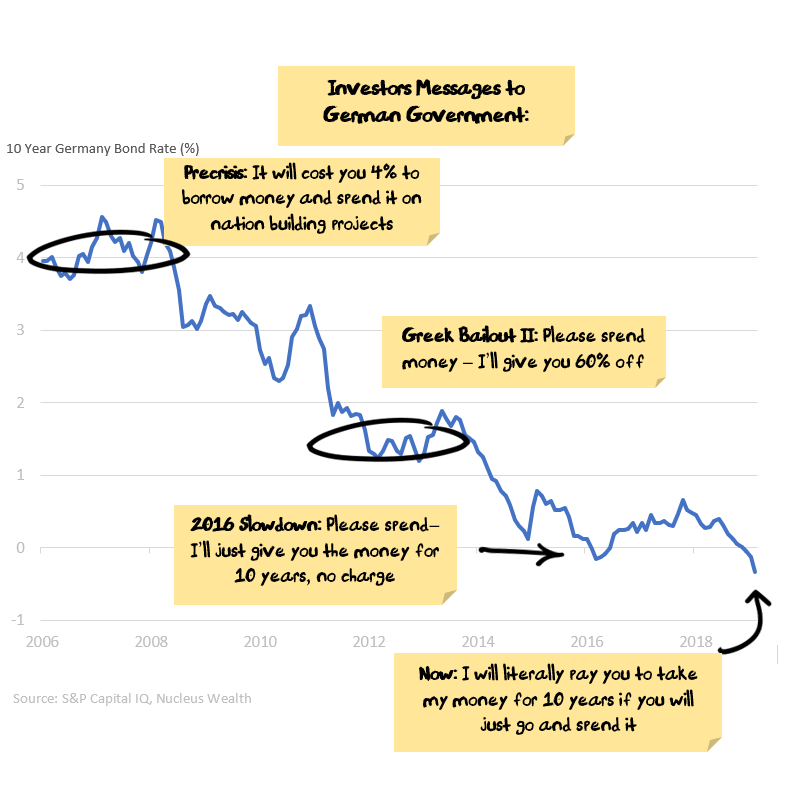 As growth slowed once again in 2016, markets changed their offer. If the German government would just borrow some money to expand the economy, they could have it for free – please just take it off the market’s hands. Yields hit 0% for the first time. The German government declined the offer.

Now, markets (and central banks) are offering to pay the German government to borrow money. Begging, pleading, imploring for economic help. In response, the German finance minister this week was threatening Italy with billions of dollars of fines because Italy wanted to run larger deficits to spark economic growth. So, I’m going to take that as declining to borrow on the behalf of the German government once again.

It is the same story in a lot of the rest of the developed world.

In Australia, the Federal government could, if it chose to, borrow at 1.3% for ten years as of Friday.  The market is begging for fiscal stimulus – a generational chance to invest in the future at an interest rate that is 1% below the inflation rate target. All it needs to find are projects that have a -1% real return. The current government doesn’t seem to think that rate of return is achievable and feels the need to strive to pay down debt instead.

Japan, in particular, is a vision of what will happen if we continue down the current path. The Bank of Japan has been struggling with an over-indebted economy and moribund consumer for more than twenty years now.

The Bank of Japan has expanded its balance beyond what conventional wisdom thought possible. The Bank of Japan effectively “ran out” of debt to buy and expanded its asset buying to buy shares through exchange-traded funds (often called ETFs). It now owns around 80% of all exchange-traded funds in Japan. It is a top ten shareholder in close to half of all listed Japanese companies.

There is still no sign of growth or inflation.

It is not an inviting future.

But Europe seems to be determined to follow the same policy path while expecting a different outcome.

With this backdrop, in 2018 with a slowing Australian economy, stagnant wage growth and ten-year government bond yields of 2.8% we felt being overweight bonds was an easy decision (investors make money on bonds when yields fall).

At the time we were one of the only voices expecting rate cuts in Australia. Now the first rate cut has occurred and further cuts are a consensus opinion.

While we were expecting Australian ten-year bond yields to fall to these levels (1.3%), we weren’t expecting them to fall so quickly – the last 6 months has been dramatic.

Keep in mind that the Reserve Bank of Australia has an inflation target of 2-3%. At current yields, the bond market is suggesting that it will not meet that mandate for the next ten years. Which, in the context of the European and Japanese examples above, anemic wage growth, world-leading private indebtedness and an overvalued housing market, is probably a reasonable assumption – unless something changes.

The low yields present an asset allocation quandary. I was hoping that by this stage we would have seen equity prices that were more reasonable, giving us the opportunity to switch out of our bonds and into equities. But equities are looking expensive. Not irrationally expensive, but certainly more expensive than we would have thought given the uncertain and low growth outlook. So are now holding lots of cash, looking for the right opportunity. 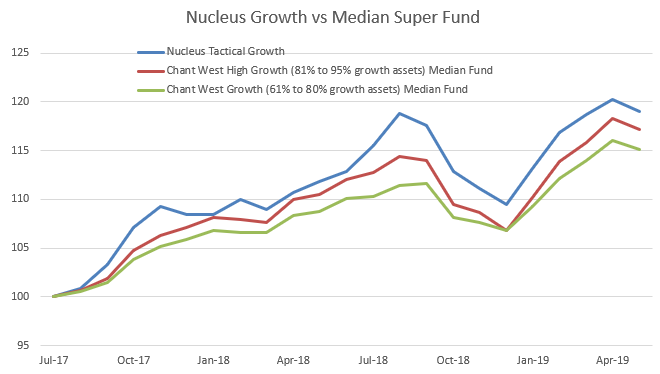 The main movements for equities was a big fall in international stocks in May which more than reversed into June so far. The surprise Australian election result meant that Aussie stocks had a huge month of outperformance over international.

The other key factor in May outcome was the underperformance of both Value and Quality strategies internationally, both down 4.8% – which is unusual for a negative month. Our international fund, which is a blend of both value and quality, with our own selection overlays, did +0.5% better than that, putting its performance back in line with the broader World Index: