After a strong August performance, September saw a pull-back in most of our portfolios amid concerns surrounding trade tensions, China’s economic growth and the outlook for interest rates, as the US Federal Reserve hiked US interest rates by 25 basis points.

All of those factors extended into October (and then some), with stock markets down close to 10% around the world at one point. Given these events, September performance is a little irrelevant and so we have opted to spend most of this post discussing the outlook for our portfolios and including October performance. September specific analysis is at the bottom of this email.

In October so far our direct portfolios have been generally outperforming the falling market, although with quite wild swings from day to day in markets the amount has varied. Our tactical portfolios have been considerably steadier, the income portfolio is down about 0.8% (vs  -8.5% for the Australian market), the foundation down 3.9% (with the US overnight bounce not yet reflected) and the Growth down 5%.

We have been carrying large cash balances for some time in our portfolios with a view that it is late in the cycle – and holding this cash has limited the downside. There are two main questions that investors have been asking:

The short answers are “no” and “a little bit” respectively. Our core view remains that US earnings and the US economy remain strong enough for the cycle to continue – absent a major shock. This does seem to be a garden variety downturn as a stock market that has rallied hard over a number of years pulls back. Fundamentals in the US still appear strong.

Were this early in the economic cycle we would be looking to use this pullback to significantly increase our weights to shares. As it is late in the cycle, we have been increasing our weights to equities at the margin to take advantage of lower prices, but maintaining a significant cash and bond holding.

There is always a long list of things that could go wrong. Sometimes, as we are seeing currently, that list becomes long enough that markets tumble – the key question is whether any of these possible problems morph into something more significant. From marketwatch.com comes a laundry list:

That looks like a long list of problems. But there are only three main immediate issues in our view:

The ultimate in “glass half empty” statements came via Reuters earlier this week:

While earnings growth is still high at 22 percent so far this quarter, the amount by which S&P 500 index companies are beating analyst estimates is nearly half of what it was during the first quarter, according to Refinitiv data.

The net effect is that earnings are growing at 20%+ and around 80% are beating analyst expectations. You would think an environment like that would be unambiguously good, but when markets are panicking then anything can be spun to give it a negative light.  US companies still have another quarter of tax-driven profit growth, plus significant growth from earnings buybacks to support earnings growth over the next year.

The US economy is not without blemishes, in particular, the housing market is showing signs of slowing. However, much to the dismay of those who feel that economic growth should reflect the moral fortitude of the sitting US President, economic growth elsewhere has been strong, wage growth picking up and inflation contained.

While there are valid question marks about the long-term sustainability of government deficit spending, this is not a near-term economic issue.

Rising rates might affect US growth, but in our view it is far too early to draw that conclusion from the limited increase in rates and their low levels.

The key indicator is growth in credit, and credit continues to  slow.

In response, there has been a significant lift in infrastructure approvals:

Our view is that the Chinese economy will slow quite markedly on the manufacturing and industrial side, which will be offset by increasing spending on debt and infrastructure. It is likely that the Chinese economy will slow further before the government stimulus kicks in, and that may not be enough to halt the slowdown completely but neither will growth fall off a cliff.

We are mildly positive the bulk commodities (iron ore and coal) given the infrastructure and property spend that is likely, but less positive industrial metals which will be hit more by slowing demand.

A Saudi ex-pat journalist appears to have been murdered in Turkey by Saudi agents. There is significant international condemnation, but currently it would seem that the US is likely to try to limit sanctions.

There is a risk that the condemnation turns into something more concrete and that oil prices rise significantly. It would seem that Turkey has evidence that it is using to achieve its own political goals.

Given our heavily underweight oil stance, we added a little to our oil exposure over the month. Our portfolio would still be negatively exposed if oil prices rose significantly – but we felt it prudent to hedge some of the risk.

Australian equities have largely fallen at the same rate as world equities in recent weeks, and over a year are running almost 10% behind world equities.

However, most of this has been currency movements, and Australia still has some of the world’s most expensive sectors and a poor earnings outlook: 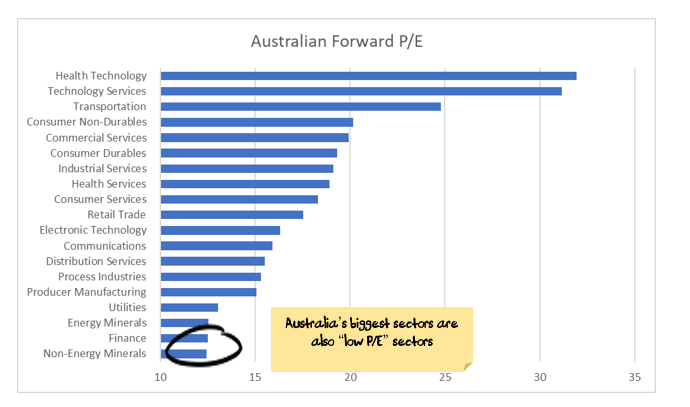 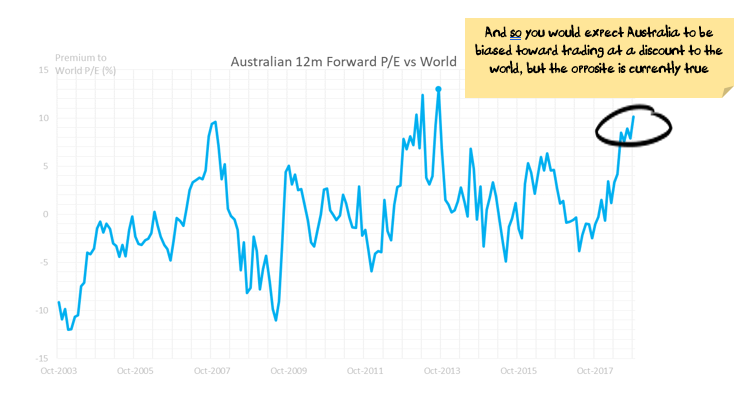 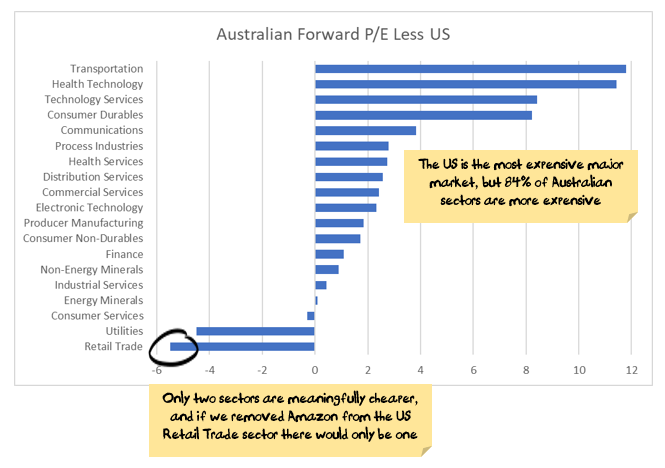 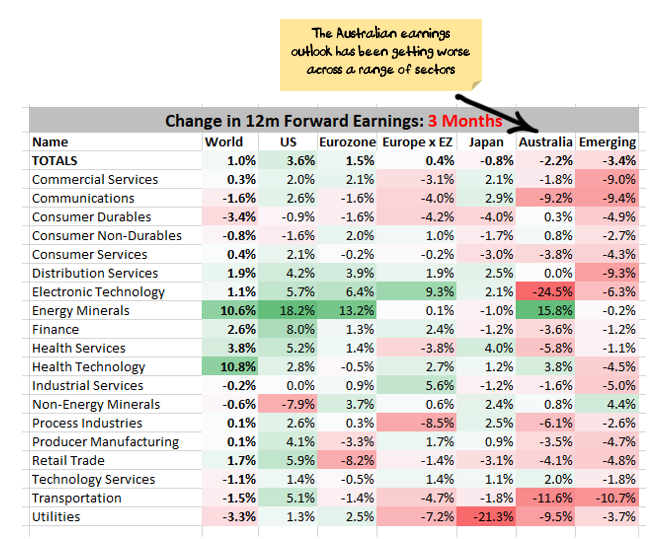 September was mixed for US  equities as the flagship Dow Jones Industrials and S&P 500 indices finished in the green with gains of 1.9% and 0.4% but the tech-heavy Nasdaq was posted a modest decline of 0.8%.  UK and Eurozone equities were broadly flat during September. Trade war rhetoric at the start of the month and Italian budget concerns at the end of September weighed on market sentiment. Japan bucked the trend with a solid month ending with solid gains.

While our portfolio benefited from the gains in Japan, European stocks dragged on performance. The pullback in the US Technology sector, particularly the Semiconductors also dragged on the portfolio.

Bond markets saw a period of calm return in September. As sentiment strengthened government bonds sold-off, giving back gains made in the previous month. The rise in government bond yields had a negative impact on corporate bond yields, however, with the premium over government bonds that companies must pay to borrow remaining broadly unchanged over the month.

As expected September saw the US announce tariffs on a further US$200B of Chinese imports and, in response, China introduced a retaliatory tariff list of US$60B US imports, with additional tariffs ranging between 5% and 10% and the trade impasse continues. On a postive note, Canada and the US reached a trade deal with Mexico to replace NAFTA.

While the month of September wasn’t very strong the September Quarter was the strongest quarter for the US equity market since 2013.

The broad sweep of our asset allocation over the last 18 months was to ride the Trump Boom, switch into Europe in March / April last year as the US became overvalued and then switch back into the US as the Euro rallied and the USD fell.

We had been using rallies in stock markets to reduce our holdings, but have flipped to using the recent pullback to top up our holdings.

Our tactical foundation portfolio is designed for investors with lower balances, it uses exchange-traded funds for its international exposure rather than direct shares. The reason for this is parcel sizes,  you can’t buy half a Google (Alphabet) share directly and so we use exchange-traded funds which buy baskets of stocks instead. The tactical foundation portfolio is a balanced fund, not as aggressive in its holdings as the growth fund nor as conservative as our income fund.

In September this fund increased by 0.1%.  The fund continues to be underweight Australian stocks.

We repositioned the portfolio in September to gain greater exposure to the rally in the Japanese market adding Sony and a number of oversold Japanese stocks while taking profits in Casio. With the hurricane season approaching, and weaker than expected pricing in re-insurance markets we switched re-insurer Everest Re for a lower risk multi-line insurer Allianz.

Domestically, we have continued to down weight in growth stocks after a strong quarterly performance and have re-weighted to core value stocks.

In September semiconductor equipment manufacturers continued to pull back but there was also weakness in the newly reclassified Communication Services stocks(Google, Facebook).  Performers came mainly from the more defensive Healthcare stocks but also quality Tech names like Apple, Microsoft and Sony.

Domestically the Growth stocks had a pullback while Resource stocks were favoured with falling AUD. Telstra once again had a good month as its relative rerating continued.

We manage our portfolios for investors through separately managed accounts, which have a host of benefits including transparency,  individual tax treatment, direct ownership, customisations (including ethical overlays) and low trade costs.

The table below shows performance for a client paying the maximum administration fee. We have not added in any benefit for franking credits or for withholding tax credits. 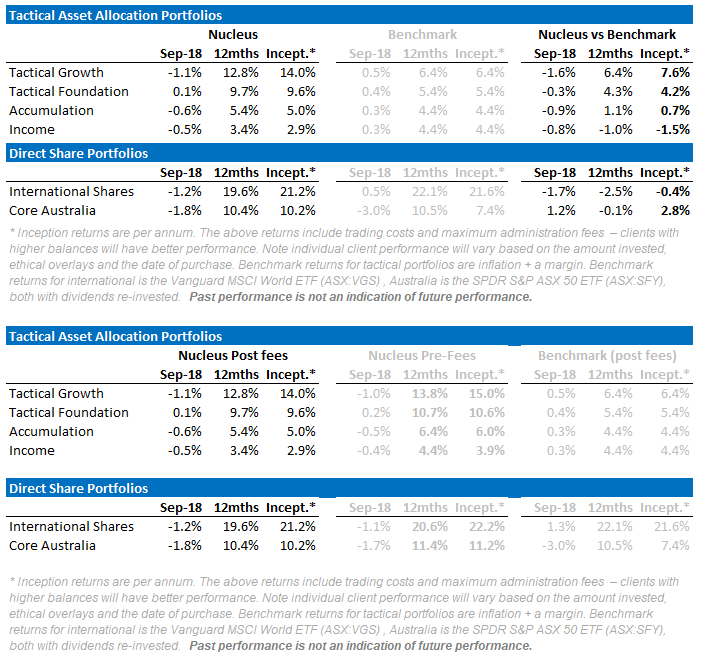 In summary, our view continues to be that Australian investors are better off holding international investments at this point in the cycle.

We retain relatively large cash balances to hedge against volatility and to look for a cheaper entry point. Given weak markets, we have been looking to buy more equities. We are concerned about the potential for trade wars or an emerging markets crisis. These will be a key focus for us over the next few months.

Markets are clearly not without risk. We spent July and August winding back equity positions, but have been using recent market weakness to begin building positions again. Over the longer term we have concerns for equity markets, but the recent market pullback is premature, there are still a range of economic outcomes which could see markets continue to grind higher.